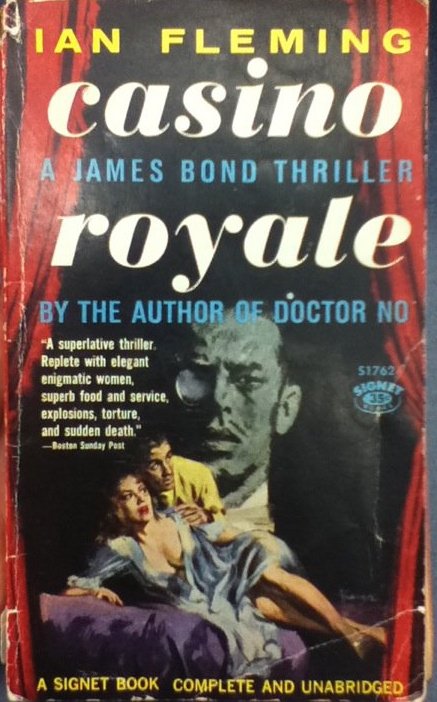 Ian Fleming, Casino Royale (1953) – Bond was never my favorite spy. He’s probably the first I heard of, but I never really got into him, either sincerely or for camp reasons. As alluded to in an earlier review, I’m a Bourne guy, despite my acknowledgment of its overly-earnest quality. But when the first Bond novel came up on a library free pile, I figured I’d give it a try. Among other things, I’m interested in how the installments came to be such an established, almost ritualized formula.

When people talk about the pleasures of “genre” narratives rather than “literary” fiction or “art” films, one of the things they go to is plot. Genre focuses on tight plots that deliver the goods in fine prescribed formula, rather than futzing around with experiments. Of course, the way genre fiction tends to sprawl sometimes, especially lately thanks to your George R.R. Martins, Robert Jordans, Steig Larssons et al, so “tight genre plots” aren’t all they used to be.

But I gotta say… the plot in “Casino Royale” was “tight” to the point of being nonexistent. A Soviet agent, Le Chiffre, ripped off his operating funds (for his evil Communist labor union!) and is trying to get it back by gambling. MI-6 sends James Bond over to rook him at cards, preventing Le Chiffre from making good. The stupid thing is… Bond beats Le Chiffre (at baccarat- the filmmakers changed it to poker, and for good reason, baccarat sounds boring), Le Chiffre and his goons kidnap and torture Bond, and then… the Soviets just come and kill Le Chiffre anyway, and let Bond go. The end. MI-6 could just have waited for the Soviets to clean up their own mess.

So, presumably, the plot isn’t the point. The point is to inhabit Bond’s world. Though, being the beginning of the series, it’s much less elaborate than it eventually becomes. The SMERSH network of which Le Chiffre is part is borderline scifi in its omnipresence, but none of the scifi gadgets or anything are in play yet. Bond isn’t jetting around the world- all the action takes place in one faded resort town in the south of France. He only sleeps with one woman, who of course turns out to be both a useless impediment AND a spy and who kills herself out of guilt after she falls in love with Bond.

I didn’t think it was anything special but you can tell why readers would like it. It’s short and moves along quickly. For readers in post-imperial Britain just emerging from wartime austerity, a character who affirms traditional British values, lives it up, and asserts British geopolitical relevance while doing so must have been appealing. And Fleming does develop a distinctive narrative voice for Bond. It’s an adaptation of older British spy protagonists like John Buchan’s Richard Hannay: upper-crust British gentleman as ubermensch. He’s “over” as in superior to almost everything and just sort of bored and blase. He’s demonstrably cultured (at least in a consumer sense- clothes, cars, food and wine) but also something like Nietzsche’s “blond beast”- brutal, violent, rapacious, lordly. That parallels the other cheap pathos-generating technique you get in this kind of narrative- Bond thinks feelings don’t matter, but inevitably, in every story, he has feelings of some kind… and they matter a lot because the feelings of a guy who normally doesn’t have them are worth more on the pathos exchange. I’ve often thought a lot of pop works on those sort of emotional antinomies.

At this early stage, it seems like Fleming is wavering between embracing Bond-as-we-know-him and experimenting with a more noir sensibility, where the whole enterprise is seen as dirty and morally compromised. You get the idea that maybe we’re not supposed to really like Bond. But in between bouts of post-genital-torture freshman philosophizing in his hospital bed and quickly falling in and out of love with the lady spy, Bond entertains and rejects both moral relativism and romantic love. I’m not going to run out and buy the next installment, but if turns up on a library pile, I’ll probably pick it up, if nothing else to trace the developments. **’