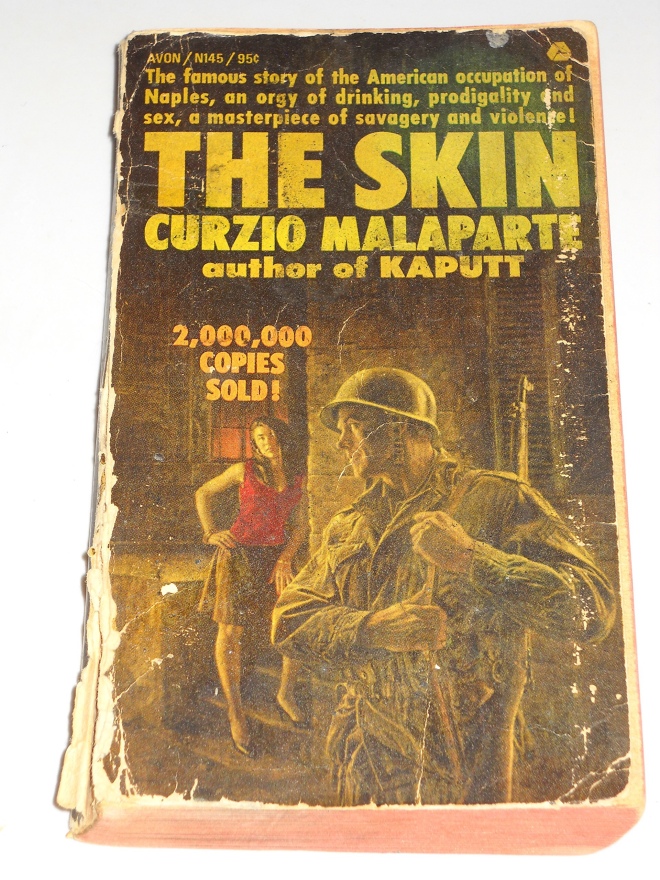 Curzio Malaparte, “The Skin” (1949) (Translated from the Italian by David Moore) – Curzio Malaparte was born Kurt Erich Suckert in the German-speaking part of Italy. He was an early supporter of the Fascist party, although (and here this “although” is often used in an exculpatory sense, but not really by me) he clashed a lot with the Fascist authorities and later in life became both a Communist and a Catholic. Really rounding all the twentieth century bases, there! He wrote a book on coups d’etat that’s still read today by nerds into that kind of thing, and if wikipedia is to be believed, this is why he was put into internal exile by Mussolini.

Internal exile or no, he still saw a lot of World War II. “Kaputt” takes place on the Eastern Front, where Malaparte was a reporter- I read it early in grad school, my introduction to the author. “The Skin” takes place in freshly-Allied-occupied Naples in 1943. Malaparte finds himself a translator for high-ranking American officers, who he likes in a patronizing kind of way. The Americans strike him as utter innocents, unable to understand Europe, unable to understand themselves as conquerors even as people practically beg them to act as such…

Like “Kaputt,” “The Skin” is made up of chapter-length vignettes loosely connected. I remember noticing in “Kaputt” that Malaparte put a lot of emphasis on the supposed Asiatic character of a lot of the Soviets he saw. In “The Skin,” you get a similar emphasis on the amount of black soldiers deployed by the Americans and the Free French, so I think Malaparte did have his racial bugaboos. Prostitution is the central metaphor here- Naples, having been conquered so many times over, is experienced in selling itself to conquerors, but the Americans hold their noses and remain above it, even while Malaparte depicts them as wading through European decadence and corruption up to their necks. There’s several stories lingering on sex work, especially interracial sex work, and many of the rest are about an international society of decadent gays that find their way to Naples, I guess, by following their decadence-radar. I think the centrality of these poorly aged metaphors maybe serves to explain why “Kaputt” is the Malaparte go-to (to the extent people are going to Malaparte) rather than “The Skin.”

Away from these metaphors, Malaparte adeptly combines the surreal and the all-too-real. My favorite story is probably the one where the American officers are served a fancy fish dinner by the remnant of the Neapolitan aristocracy. No one can fish in Naples’ heavily-mined waters, so they get served fish from the aquarium, including mythical beasts like sirens. Malaparte’s exchanges with the Americans are also often pretty good, with a good comic rhythm that almost inevitably ends with the American officer calling Malaparte a bastard but being unable to dismiss him. In all, an idiosyncratic work less good than “Kaputt” but worth reading for people into writing from the ideological gangfuck of pre-1945 Europe. ***’

2 thoughts on “Review- Malaparte, The Skin”