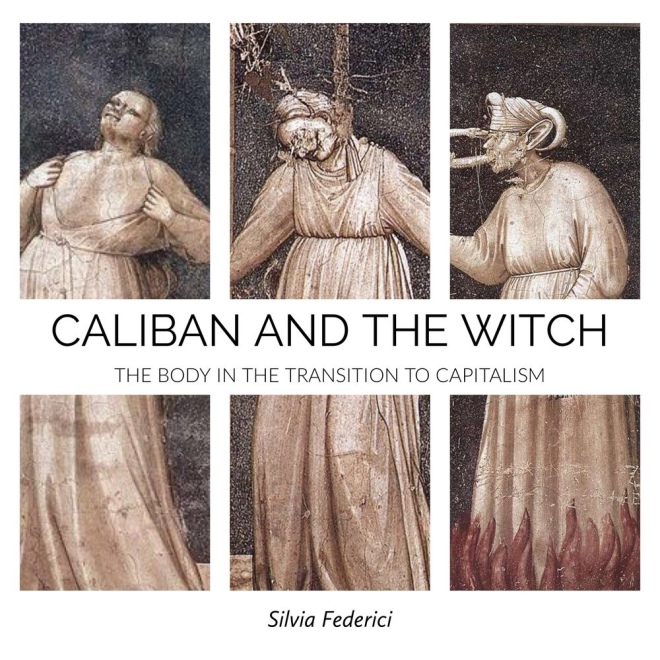 Silvia Federici, “Caliban and the Witch: Women, the Body, and Primitive Accumulation” (2004) – The current vogue for the witchy in certain circles wouldn’t be a vogue if I could get into it. This is due both to my being a cis straight (in both the sexual and the comedic sense) man and, more to the point, because if I’m involved, it’s either timeless or just plain not cool anymore, whatever “it” is. But that hasn’t stopped me from reading and enjoying contemporary classic “Caliban and the Witch.” With this wildly ambitious book (especially for its relatively slender 240 or so pages), Federici stakes several world-historical claims and tries to stay between three theoretical stools at once, whilst critiquing all three: radical feminist, Marxist, and Foucauldian.

From the feminists she takes the thesis that the great witch hunts and to a lesser extent heresy-hunting in general was a war against female power. This was aimed at disciplining and rationalizing the human body in certain ways- the slightly quavering Foucauldian note. That note becomes solid when wedded to the Marxist bottomline: that this disciplining of the body and campaign against female power was a critical part of the primitive accumulation process that led to the take-off of capitalism, and that capitalism and the spectacular oppression of women would be impossible without each other. For added bravura, Federici argues this process in ongoing today in parts of the developing world, as IMF-backed enclosure of commons goes hand in hand with febrile paranoia about women’s independence, both from men and the market order.

I think Federici makes a compelling argument. Like a lot of big claims, there are gaps in the story left by scant sources with which she, perforce, worked. For such large-scale violence — hundreds of thousands dead across three continents — the witch hunts are not well-understood history, and both the witch hunt and the heretic hunt (two different, if sometimes converging, things) tended to erase the voices of those they persecuted, leaving only the inquisitors’ words. But Federici makes valuable deductive points: most importantly why, all of a sudden, in the 16th century, did a campaign against witches, eighty percent of them women, start with such vociferousness? Medieval Europe knew heretic hunts, brutal ones, but did not consider witches heretics until surprisingly late, well into the “early modern” period as most understand it. Why this sudden turn on healers and midwives? Most studies are either too broad (citing a vague general cultural madness) or too narrow (citing a vague local cultural madness) to really answer that question. That this coincided with the crises that led to the rise of capitalism seems obvious in retrospect, one of the signs of a good theory.

This book largely relies on secondary sources. Often, these secondary sources are primary-source heavy works of history or anthropology, but they are secondary sources nevertheless. I’d be curious to know what the scholars Federici cites think about her larger thesis. In my experience, medievalists and early-modernists tend to jealously guard their realms from modernists looking to make points and comparisons. They might dispute many of Federici’s claims, and notice how fast and loose she sometimes plays with periodization. Notably, her claim that capitalism arose as a way to suppress challenges to the feudal order that came from the lower classes, heretics, and women is big and seems anachronistic, placing the cultural resistance cart before the capitalism horse. It doesn’t seem to bolster her main arguments that much, either, except to posit an unbroken thread of resistance to power across the centuries, where the story is probably a lot choppier.

In general, though, this is an exhilarating work of scholarship, passionately argued, wide-ranging, and even profusely illustrated with old woodcuts and the like. Between her unstinting (if at times unorthodox) Marxism and her publication with Autonomedia, one could see this work being ignored to death by the academy… but it’s proving popular with non-academics I know. That’s something. *****

Review- Federici, “Caliban and the Witch”

One thought on “Review- Federici, “Caliban and the Witch””