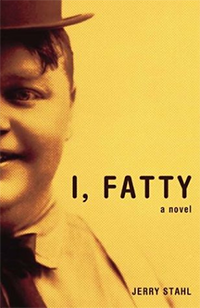 Jerry Stahl, “I, Fatty” (2005) – Stahl, one of a crop of 90s addiction-lit writers (his memoirs were adapted by Ben Stiller, apparently), tried his hand at writing in the voice of Roscoe “Fatty” Arbuckle, one of the greatest stars of the silent film era before he got hounded out of Hollywood over trumped-up rape and murder charges. There are flashes of insight here, but for the most part it’s a slog- the sort of thing that Arbuckle (he didn’t like being called “Fatty,” naturally enough), if he found himself starring in it, would have to animate with some pratfalls and thrown pies. Roscoe has a shitty family, Roscoe escapes into showbiz and it’s eccentric, Roscoe does the “E! True Hollywood Story” thing, blah blah etc etc. Maybe the framing device (it’s meant to be Arbuckle on his deathbed telling his life story to his manservant) is a partial excuse for the pacing problem but it’s a good story and a great setting and deserves better. It’s widely agreed at this point that Arbuckle didn’t touch the woman who died at his party and was essentially thrown to the wolves by his bosses to placate the moralists who had started inveighing against Hollywood as a whole. Though for whatever reason, Stahl writes Arbuckle’s actions as worse-looking than they’re attested to in the historical record. I think part of the problem with the book is that Stahl ultimately “gets” addiction (which Arbuckle certainly suffered from) more than he “gets” being fat (which, from GIS, Stahl isn’t). The embarrassing vs edgy-transgressive elements of the two states of being don’t quite track on to each other and, I think, produce pretty different mental landscapes and reactions to things. Either way, not the worst book but something of a waste. **’