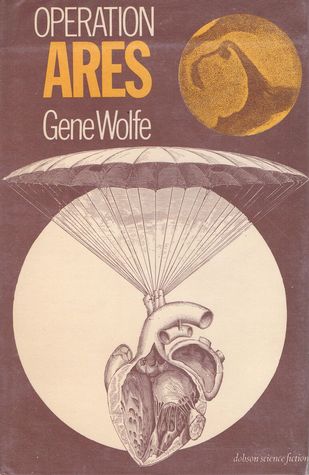 Gene Wolfe, “Operation Ares” (1970) – I mainly associate Gene Wolfe with the Book of the New Sun, a staggering, profoundly immersive work and some of the best books I’ve read in the last few years. So it’s a little weird to read him doing straightforward pulp scifi, like “Operation Ares,” his first novel. In the early 21st century, welfare bureaucrats have suspended constitutional governance and run America into the ground. Wolfe’s depiction of callous, patronizing social service bureaucracy actually does seem pretty sharply drawn, though some of the other choices he makes for the world — namely, the welfare state consciously turning its back on technology, allowing the Soviets (now allies with the US) to pull way ahead — are real headscratchers even from the perspective of a paranoid mid-century American right-winger. The hero is a standard-issue scifi ubermensch, universally competent and cool-headed, who chafes under this reign of mediocrity and conspires with Martian colonists — who the liberals in the US abandoned and blame for their troubles — and, weirdly enough, the Maoist Chinese to rebel against the government and bring back the constitution.

Even leaving aside the politics, it’s a bit of a bummer to read Wolfe do such generic plots (and often hare-brained, ill-explained schemes- he would come to master the use of limiting information to the reader, but hadn’t at this time) and stock characters. But he brings some glimmers to it that more pedestrian writers wouldn’t. To his credit, the charges of the welfare bureaucrats are depicted as realistic humans (and, seemingly, aren’t racialized), and develop some interesting ideas of their own, including a sort of urban-primitivist hunter cult that’s pretty well-drawn. He gets some good mileage out of the strains in the alliance between the cerebral, technocratic Mars colonists, the Maoists, and the ragtag American constitutionalists, and isn’t naive about how much damage internecine war will do. But how much can you say about a scifi novel that ends with the hero lecturing King Bureaucrat about personal responsibility and the need for a Universal Basic Income to replace welfare entitlements? ***