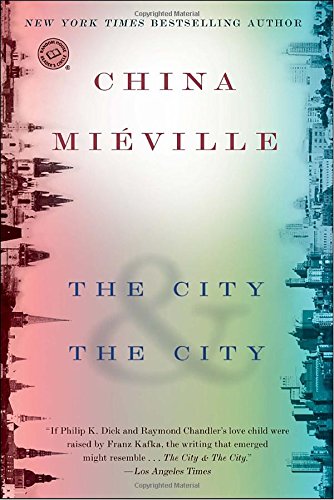 China Mieville, “The City and the City” (2009) – China Mieville has claimed he wants to write at least one novel “in every genre,” which given the murky boundaries between them sounds like a difficult-to-define goal, but admirable. In “The City and the City” he tries his hand at the classic Chandler-esque detective story, except all Mieville-d up. The titular cities are Besz and Ul Qoma, two Eastern European city-states which are in some quasi-magical quasi-political sense superimposed on each other. They occupy the same physical space and the inhabitants of the two cities just learn to “unsee” each other. Act as though you notice the two cities are right on top of each other, a mysterious and vaguely magical inter-city secret police will take you away. A body is dumped in dreary, post-communist, vaguely-Serbia/Croatia-esque Besz, but the evidence leads to thriving if unequal, vaguely Albania/Bosnia-esque Ul Qoma. So, naturally, a world-weary Besz detective needs to team up with a Ul Qoma cop who plays by his own rules, etc. And naturally, being a Mieville story, there’s dark hints of Lovecraftian dark secrets lurking in the space between the two cities.

Mieville gained his reputation because his high-concept flights of imagination (and social messages- Mieville is a Trotskyite, last I checked) are grounded by his solid genre fiction instincts. This more or less works here, though like a lot of detective stories, the catch is ultimately less interesting than the chase. To tell the truth the chase starts to lag a little earlier than in most good crime novels as Mieville starts to lay his cards on the table about what, exactly, is going on with the two superimposed cities. It winds up being an ok gloss on nationalism as a concept, but nothing mind-blowing (“aren’t ALL national boundaries just as arbitrary as between these two superimposed city-states??”). It was pretty fun getting there, though. He does a decent commie-weird-fiction Chandler. ****

Review- Mieville, “The City and the City”