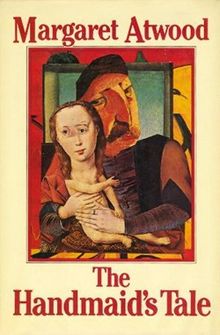 Margaret Atwood, “The Handmaid’s Tale” (1986) – Expectation management is always a factor when first reading a popular classic. I know a lot of fans of this book, but also know that the high school/college classics are often best read in high school or college, if then (have a look at “Ender’s Game” recently? You can still sense what’s good in it, but still).

“Handmaid’s Tale” delivered in an unexpected way. Structurally, it’s much more similar to the classic dystopias, like the big three of “1984,” “Brave New World,” and “We,” than I was expecting. If you told me that before starting, it would have dampened my enthusiasm. But it actually works out pretty well. It shows up some of the gaps in the classics (especially their depictions of women, a pretty serious gap in all three). Literary dystopias are always more about interventions in (and evocations of) the present than they are predictions or even really looking forward at possibilities (scifi writers get that stuff “right” much more often than their literary cousins).

The Republic of Gilead works pretty well as a nightmare pastiche- the disparate elements drawn from the evangelical revival of the 1980s, biblical and Puritan imagery, post-revolutionary Iran, and aspects of consumerist and pop culture of the period age well together and remain relevant (unfortunately). The particular configuration of elements — the castes, the costumes, the infertility, it all apparently occurring in Boston? — aren’t likely, but if the last few years have taught us anything, it’s that the dystopia will hardly be likely, except perhaps in retrospect.

Atwood’s prose is very fine, though with a lot of the sort of description that should wow me but never does (makes 19th century novels pretty hard). Characterization is as strong as is appropriate for a novel about stripping people and especially women of their individuality and free will, and the relationship between “Offred” and Moira in particular feels real and important. The relationship with Nick was a funny one, for me- in Orwell and Zamyatin, at least, the women who lead to liberation and/or betrayal are early precursors of the manic pixie dream girl. Atwood’s take — a boy who can shut up every once and again — is a good rejoinder. It’d be pretty cool if this book got nerds as worked up about women’s rights and autonomy as the classic dystopias get them about surveillance and, I dunno, ads. ****’