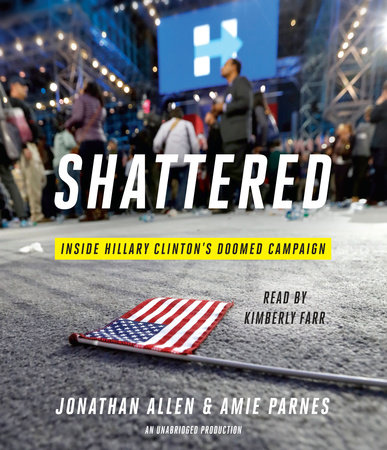 Jonathan Allen and Amie Parnes, “Shattered: Inside Hillary Clinton’s Doomed Campaign” (2017) – Allen and Parnes say up front that when they began writing about the Clinton campaign, they expected to write a very different book. Like most people and virtually everyone in their world (centrist high-end journalism), they expected Clinton to win. I think it’s pretty likely that they stitched together earlier chapters, written in an “overcoming adversity but she pulled it off” mode, to later chapters written quickly.

On its own, the book is unremarkable political journalism. The analysis doesn’t go much deeper than “this or that person succeeded or failed” or “this or that broad swath of the electorate felt/thought such and such.” The prose is forgettable except where it’s godawful, which it is in a number of places (for instance, some Clinton flunkies described as doing something like “going through the haystack of wikileaks emails looking for needles that could break her skin- or worse, landmines that could blow up her campaign”). They do a pretty good job at getting Clinton campaign people to reveal their thoughts, but that’s kind of a low bar to clear when you’re dealing mostly with millennials who had just been through something bad and very much public.

If you’re looking for a real postmortem of a campaign destined to join the Pentagon Whiz Kids circa 1968 in the pantheon of a certain kind of technocratic liberal hubris and failure, “Shattered” isn’t it. It managed to upset voluble internet people who think Hillary is Mom by indicating maybe she made some mistakes (along with heaping plenty of blame on Comey, et al), but doesn’t really go deeper into the why. Clinton isn’t stupid as in cognitively impaired or uneducated. Her worldview — and the worldview of everyone around her and an entire class who she represented — made her (and them) act stupid. It wasn’t just one person’s failure- it was the failure of a whole class, a whole idea of politics and governance, a whole way of life. Moments like that are key, both for the societies that go through them and for historians wanting to understand those societies.

Allen and Parnes don’t get nearer to a system critique than saying “people were mad and Clinton and her data-blinkered gnomes/doomsday cult were just too wonky to get it.” That, combined with the writing, makes it frustrating at times- like, we all know how this story goes, why not tell us something more? But to a certain extent, it’s fitting that the first draft of that story comes from people who more or less accept the premises of that class-based worldview. This could become a reasonably important primary document for whoever comes along and does for this fuck-up what Gabriel Kolko, David Halberstam, or Richard Barnet did for Vietnam. ***