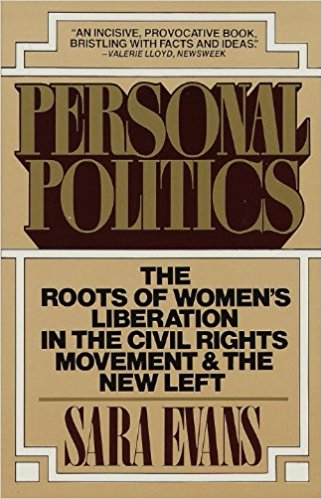 Sara Evans, “Personal Politics: The Roots of Women’s Liberation in the Civil Rights Movement & the New Left” (1980) – As far as I can tell, this is the first draft of a story that has since spread from history to the sort of apocrypha that politically-engaged people could be expected to know, and it’s more or less right there in the subtitle. The thing about the movements from the sixties is that they are extremely well-documented, or anyway, enough of them were to fill a whole literature with the comings and goings of people in SNCC, SDS, the Black Panther Party, etc. I wonder what sort of movements from that period we miss out on, because their members and epigones didn’t write as much down? Neither here nor there, I guess.

At this point, I think it’s a reasonably familiar tale: men in these movements, especially the insecure upper-middle-class white boys in SDS, routinely marginalized and often belittled the women who played key organizational roles in the sixties movements. These experiences — both taking part in the movements and facing sexism within them — formed the seedbed for the women’s liberation movement that burst onto the scene in the late 1960s and which reached its greatest prominence in the 1970s. Evans tells it as a pretty neatly dialectical story- if these women hadn’t experienced the massive let-down of movements that promised justice, equality, a real community but delivered patronizing attitudes (at best) towards them, then they would never have brought their grievances together and formed a movement.

“Personal Politics” has the strengths of the best early movement histories, especially its finely trained analytical descriptions. It also has its weaknesses- especially once the story leaves the south, it is overwhelmingly white and middle class. There were women of color and working class women pursuing women’s liberation and which engaged in a complicated dialogue with the other movements, but you don’t get much of that here. That’s largely a reflection of the blind spots within the movements Evans writes about, but it’s still a missing part of the story.

For the most part, “Personal Politics” is a fairly concise record of discrete stages leading up to the formation of the various dedicated women’s liberation movements, replete with copious drawings from the letters, diaries, and interviews of women who had gone through the various movements. Evans has some keen insight into the inner dynamics of these groups. Most interesting to me were the politics of the concept of community. Not unlike Occupy — another movement dominated by kids who had just barely started critiquing the system they lived under — the student movement fixated on its internal culture, which was meant to prefigure the transformation into the “beloved community” (like Arnold’s “sweetness and light,” it’s impossible for me to imagine how people would use such a saccharine-sounding phrase sincerely).

There’s a couple of tragic elements to this. The first is how clearly their prefigurative politics were a gesture of powerlessness (and so was their eventual turn to violence). SDS ran up very quickly against the real limits to the outside-community-organizing model. Without a base in a class that take power (like, say, the working class), you aren’t going to get real transformative change, no matter how hard you work or how sincere you are to get playgrounds for the kids in Newark or whatever.

The other tragic dynamic, more directly relevant to Evans’s book, is dealing with power dynamics within “the community.” The student movement stumbled on pretty much all of them, but none more than gender. As it turns out, goodwill isn’t enough to create good outcomes, and curdled goodwill can positively prevent them. Among the most important contributions of second-wave feminism (that’s the right one, right? I get the idea that the wave stuff can be a point of contention) is the rediscovery of the power structures undergirding institutions we all too often take for granted, especially gender, sexuality, and the family. As Evans relates near the conclusion, the movement never quite got to grips with the quandaries of organizing for redefining and taking power. But, there’s something to be said for refining the questions. ****’