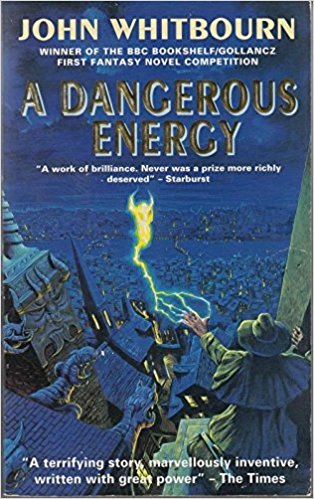 John Whitbourn, “A Dangerous Energy” (1992) – I can’t quite recall where/when I first heard of John Whitbourn. I think it was some quote from him about one of his fantasy novels being “the first Jacobite propaganda written in a century.” Somewhere else he describes himself as a “counter-reformation green anarcho-jacobite.” Let me put it this way- when I first heard of Whitbourn, those various descriptors said “whimsical and kooky,” not “probably shares pepe-oven memes and screams about white sharia” like you’d assume now from someone self-describing that way. Oh, how times change.

Either way… I finally read one of his books and it was interesting. “A Dangerous Energy” takes place in a world where the Reformation failed, capitalism and post-18th century technology never really took off (there’s railroads, but much of the world is unmapped?), and, there’s magic. The Catholic Church is the big institution, and attempts to monopolize magic by bringing its users into the priesthood (or nunhood as the case may be). The main character, Tobias Oakley, is found by some elves as a boy and learns the rudiments of magic from them, and then is recruited by the Church. The Church uses magicians in some vague research/enforcer roles.

If Whitbourn was trying to make a counter-reformation world look good, he failed abjectly- the world of the novel is cramped, ignorant, and dark. I doubt he was trying that, exactly- he evokes those feelings too well. Mostly, the world is a frame for the secular rise but spiritual fall of Tobias (yes, I did think of Tobias Funke a few times reading this). As he learns more and deeper magic, especially necromantic rituals which summon demons, Tobias leaves more and more of his humanity behind. Whitbourn isn’t clear on whether this is a consequence of Tobias’s choices, of learning magic from elves, or of learning magic, full stop.

Either way, Tobias grows increasingly amoral as his magic becomes more powerful. Magic is never powerful enough for somebody to take over by using it (it’s unclear what exactly its limits are), but it’s more than enough to help with his extracurricular activities. This starts out as simple early modern hedonism and goes on from there. He and some of his church friends get into drug-dealing, in some Ellroy-esque chapters. He joins a “crusade” against a Leveller uprising, in sections clearly influenced by accounts of the early modern wars of religion- looting, slaughter, sexual violence, and Tobias partakes in it all. Tobias grows increasingly “philosophical” — and morose — about morality and the value of human life as the story goes.

My understanding is that in most “dark” or “gritty” fantasy, or those with an anti-hero, is that there’s typically some redemption in the end- either the anti-heroes turn good, or they accomplish something good that outweighs the bad, or they just die. Well, spoiler alert- Tobias dies in the end, but there’s nothing redemptive or even cool about it. He’s just old and miserable, fully aware that he traded his soul for very little at the end of the day. In the course of the book, he goes from naif to rake to vaguely-Nietzschean amoral transgressionist to lonely old fart scared of death to actually dead. The end. It’s strange and uncomfortable — Whitbourn is clearly along for the ride with all of Tobias’s sins, and brings the reader along — but it works, in its odd internal way. This is his first novel- I’m curious what his other works are like. ****