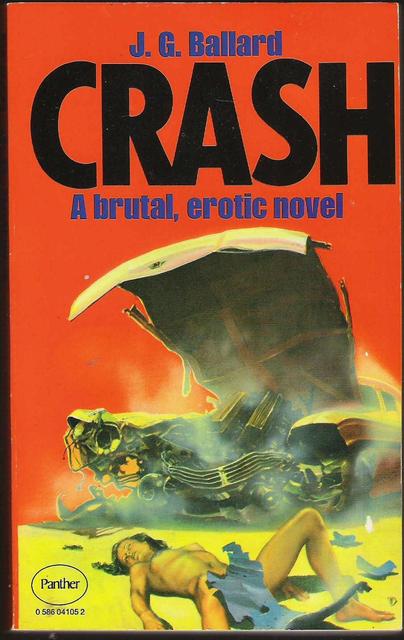 J.G. Ballard, “Crash” (1973) – British cringe-comedy “Peep Show” had a few good Easter egg jokes that paid off only to obsessive viewers like me. One of the better ones is where posh dilettante actress Big Suze says she is auditioning for “a stage version of the movie ‘Crash,’” twice, multiple seasons apart. One of them is the undeserved-Oscar-winning movie about race, and the other is about “people who get sexy about road traffic accidents.” In a grim irony, the actress who played Big Suze, Sophie Winkleman, was in a terrible car accident last year and fractured her spine. She’s expected to make a full recovery, thankfully.

It doesn’t work, really, as a novel. I know I’m something of a literary prude. I’ve never read a sex scene in fiction that I thought improved things (I’ve read a few that didn’t detract much, fwiw). But I think even if I wasn’t, I’d find the sheer copiousness and repetitiveness of the narrator’s sexual descriptions of everything trying. Think the way Patrick Bateman narrates in “American Psycho” (I get the idea Ellis probably, er, borrowed a lot from Ballard), except with much more use of the phrase “natal cleft.” The narrator — also called Ballard — is both seethingly horny and deadpan clinical. This clinical depthlessness extends to the plot. It could actually be pretty interesting — a band of fetishists seeking to recreate fatal celebrity car crashes — but Ballard sticks with the whole “anhedonic postmodern” thing and so it’s both thinly fleshed out and drowned in the narrators surface patter about jerkin’ it and car metaphors.

At this point, everyone would have been better off if he went Borges-style and wrote a capsule review of this novel as a theoretical object, because basically that’s what this is. It’s a stunt, meant to prove a point, at tedious length. I think a lot of writers and critics confuse stunts and pranks with innovation. That’s an unfortunate import from the worst parts of modern art — the kind of thing that has made most of the plastic arts a reserve for jaded rich kids to doodle in a masturbatory fashion for each other — into literature. As it happens, we have the happy information that Ballard is capable of more- of genuinely doing something new and interesting, rather than alluding to the possibility of doing it. **