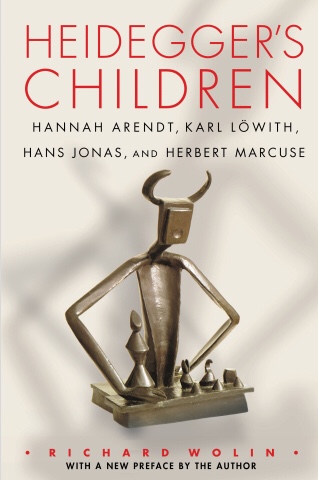 Richard Wolin, “Heidegger’s Children: Hannah Arendt, Karl Löwith, Hans Jonas, Herbert Marcuse” (2001) – There’s no saltiness quite like that of an academic vindicated in a long-held, long-dismissed belief. Intellectual historian Richard Wolin had been beating the drum about the Nazi past of Martin Heidegger, the greatest (in the sense of being a big deal) philosopher of the twentieth century, for years. Heidegger is as big of a deal as he is because his influence goes well beyond philosophy departments into… well, other university departments- literature, architecture, etc. His phenomenological framework is sufficiently powerful, flexible, and more than anything else, glamorously incomprehensible, that he was useful and appealing to a lot of people. They all knew he was a Nazi party member. Most of them probably knew that his excuses for it — he felt pressure, he tried to avoid politicizing the university, etc etc — were specious at best. They must have noticed certain, shall we say, elective affinities between Heidegger’s critique of modernity and some of the “Völkisch” tendencies that went into Nazism. But it was all vague enough to be waved away, at least during Heidegger’s lifetime.

Wolin didn’t buy it in the nineties, when he became embroiled in the Heidegger Controversy (it gets caps- Wolin edited a collection on it) and when he was writing “Heidegger’s Children,” and his exasperation with the defenses of the Black Forest Sage shines through the text. It examines four of Heidegger’s major students – Hannah Arendt and Herbert Marcuse being the best known, though I’d say Löwith is also worth reading – all of whom were Germanized Jews, and their relationships with their teacher. Even his pre-Black Notebook defenders admit Heidegger had an anti-semitic streak (not that it stopped him from sleeping with his grad student Hannah Arendt, which, you know, not exactly what you want in a sage either). But evidently his charisma and philosophical powers were enough that it attracted these students. Wolin argues that the degree and kind of assimilation on the part of middle-class German Jews played a crucial role in allowing these relationships to take place despite the master’s distaste for Jews. I don’t know enough about German culture at the time to say, but it sounds both basically accurate and overstated, perhaps majorly so.

Wolin goes through each one, considers parts of their oeuvure, and in each case condemns the philosopher in question for not separating themselves far enough from Heidegger and his elitist anti-modernism. He attributes the flaws in Arendt’s “Eichmann in Jerusalem” and her bien-pensant liberal elitism to the same flaws that led her to play a weird double game for Heidegger even after their affair. Hans Jonas (whose work I don’t know) seeded the German Green movement with bizarre and unhelpful antimodern sentiments drawn from Heidegger, the master he abandoned decades before. Marcuse managed to escape his gravitational pull more — he had more independence from Heidegger, in large part due to his Marxist commitments – but still meandered through efforts to square the circle of reconciling Heidegerrian phenomenology and Marxism. Löwith… I don’t remember what his issue was and I haven’t got the book in front of me. He did something wrong, and it was the fault of whatever it was drew the guy to Heidegger.

All this, in 2001, before the Black Notebooks came to be published to the extent they have, and Heidegger’s genuine enthusiasm for Nazism became impossible to hide! My edition has an extended preface where Wolin relishes dunking on Heidegger’s assorted defenders. It’s hard not to appreciate his enthusiasm- even if you take something from the philosopher’s work, his academic defenders were a trendy lot (there’s a hipster architecture magazine called “Dwell,” a self-conscious nod to one of Heidegger’s later philosophical hobby-horses), their prevarication was pretty weak, and it’s satisfying to see the historical record get its due. That being said, it leaves a larger question – what do we do with important cultural figures with abhorrent political views? – unanswered.

Several times, Wolin insists on Heidegger’s brilliance and importance, while also condemning his work tout court as fruit of the poison tree of German reaction. We are left with no idea of how to reconcile that. For my money, he’s right- Heidegger is both brilliant and toxic. We make use of many toxic, dangerous substances, and the work and ideas of those who walked on the dark side of modernity – by no means restricted to fascism – should qualify, if radioactive materials do. Heidegger asked a lot of questions in a very provocative way, and helped break up the staid academic philosophy of the early twentieth century (with a lot of help, including from mentors he spited, like Husserl). He isn’t someone you should take moral (or political) advice from, and maybe this is just my materialism talking, but that seems to be the problem more than anything. Both Wolin and the Heideggerians he puts on the dock tried to get usable morals out of a twentieth century philosopher. Classic mistake! ***’