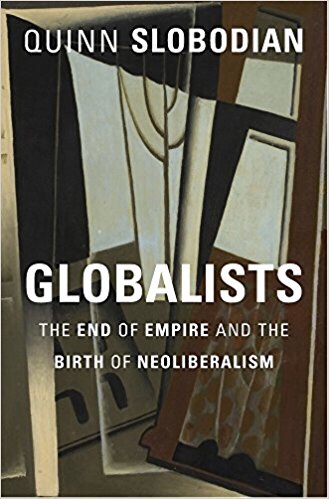 Quinn Slobodian, “Globalists: the End of Empire and the Birth of Neoliberalism” (2018) – Speaking as someone who has confronted “anarcho-capitalists” on the other side of the line at counter-fascist demonstrations (including one where these supposed anarchists came out to support ICE), the idea that neoliberalism and empire might have some elective affinities was not a new one to me. But historian Quinn Slobodian opens up some new angles by looking at the “Geneva School,” a circle of mostly German-speaking economists and lawyers and a counterpoint to the much more celebrated “Chicago School” of neoliberal economics and governance.

The Geneva neoliberals — figures like Wilhelm Ropke, Joachim-Ernst Mestmayer, and, Slobodian argues, Friedrich Hayek deserves to be seen in their company as well — come off as a gloomier, more philosophical, continental counterpart to their sunnier, gladhanding fellow travelers based at U Chicago. No PBS specials for them, like you got with Friedman! There’s a certain degree to which the Chicago School got over by sleight of hand- math proves the market, and we don’t need to think that much about the institutions that make it happen (or don’t). The Genevans didn’t think that much of math — Hayek was no friend of modeling — and thought a great deal about institutions. Emerging out of the collapse of the Hapsburg Empire and witnessing the rise (and bloody suppression) of Red Vienna, literally out of their office windows in many cases, European neoliberals thought deeply for decades about what could protect the market from those two persistent enemies: states and peoples.

Slobodian depicts the Geneva School as persistently fascinated with two empires: the Hapsburg empire that ran Central Europe when many of them were young, and the British Empire at its height in the nineteenth century. They saw both (pretty ahistorically, fwiw) as benign supranational referees and guarantors of market order, lowering barriers to the free movement of goods, capital, and people. As they and other empires collapsed, and more (and browner) nations began asserting themselves, the Geneva School came to concern themselves less with liberating markets and more with casting about for ways to replace empire in its supranational governance role.

In the interwar period, many looked to the League of Nations; thereafter, they fought amongst themselves as to whether European integration could be turned to their purposes (spoilers: it could), and set up GATT and WTO to play the role empire could not anymore. These were/are all institutions encased from democratic pressure, even the indirect pressure of legislation or diplomacy. More than economics, the Geneva School pit many of its chits on law, especially constitutional law. For Hayek and Ropke as for Schmitt and Machiavelli, the moment of decision — of staking a value claim — was the foundational moment of a given order that determines all else that comes after.

This neoliberalism was generated by fear. First it was fear of the masses in Europe and the industrialized countries, then of the nation-states who might undermine the market to appease them. Finally, and this is what gave them their opening to international influence in the 1970s, fear of the rising decolonized nations, demanding what was due them and attempting to rewrite the rules of the game. Not that the scraggly bearded ancap teens I’ve seen waving the black and gold for ICE would know or care, but in many ways neoliberalism really is about setting up walls against people, so that people don’t set up walls against capital. This includes racial barriers, as shown by the neoliberal activists who condemned South African apartheid for its market distorting aspects only to propose replacing it with various intricate racially-weighted franchise schemes to protect against majority rule.

Along with illuminating neglected corners of the history of neoliberalism, “Globalists” also presents some new angles on the twentieth century more generally. Most of the Geneva School thought the Cold War an irrelevance waste of time- Hayek wrote somewhere about the US and the USSR bidding to fund the socialist experiments of ex-colonies, and if you see any kind of government developing aid as “socialism,” it makes sense. The Cold War US cared less about “free” markets than it did about markets open to itself, attached to states who were amenable to its Cold War goals. Neoliberalism only really came into its own when developing world self-assertion (and developed world reaction) forced the elites of the US and elsewhere to abandon more robust development strategies and find ways to simply contain and discipline developing countries rather than entice them.

Moreover, this work reveals neoliberalism as an art of governance, and as one in a long old European tradition. Rather than the sunny (if clinical) rationalism of the Chicago School, the Genevan neoliberals insisted on a murky, turbulent world. To them, really comprehending the market — or any complex cybernetic system — was both impossible and vaguely wrong to attempt. What created order and allowed for (some version of) progress was continual adjustment under pain of severe negative circumstances, and the key figure of this process — the decisionmaker taking the role of Schmitt’s dictator or Machiavelli’s prince — is the entrepreneur, attuned to the ineffable flows of supply and demand and taking risks on value propositions. This is a strongly philosophical and moral vision, and the neoliberals sought — seek, in many cases — to create constitutional orders to bring that moral vision in to reality (or remove the artificial impediments “special interests” put up against it, in their telling). This doesn’t mean small government or non-intervention- far from it. It’s not hypocrisy, then, for “free market” fundamentalists to support calling out the troops to break up strikes, or force countries to lower tariffs, or separate asylum seekers from their children. That’s what the free market order is. *****