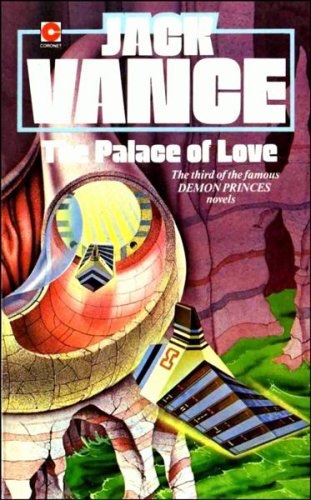 Jack Vance, “The Palace of Love” (1967) – This is the third of the Demon Princes novels, a sort of space-opera-revenge series with western overtones. Kirth Gessen’s village got enslaved by a gang of space pirates led by the five Demon Princes when he was a boy, and he’s spent the rest of his life pursuing revenge, one (book) at a time. By this third book Vance is a bit looser, building more character into Kirth’s quarries. The first two Demon Princes were mostly distinguished by their provenance in a species that mimics mankind and attempts to excel it. Kirth’s target this time is a human- and an incel! Viole Falushe got into the space slavery game as a result of being spurned by the cool girl in high school. Very human self-pity and self-regard fill in for whatever alien-species stuff Vance used as a motivation for his bad guys in the last two books, and it works out.

The thing with Vance villains is that they are generally aware of the absurdity of their situations but are so wrapped up they continue on anyway. There’s no becoming the cool boy with the girl that Viole wanted to be, so he resorts to increasingly high-concept and creepy ways to replicate it, all of which fail. Eventually, it’s these failings that give Viole away, and after hanging out with a feckless poet who influenced the young Viole and doing some detective work, allow Kirth to find his man and give him his just desserts. But more than the plots, which can be somewhat pro forma, the Demon Princes books get their juice from the baroque shapes Vance envisions human societies and personalities taking in response to environments, cultures, personal obsessions, etc. No one comes up with worse hells than Vance — Viole’s last scheme to get what he wants is pretty grotesque stuff, even by my standards — so it’s forgivable if the straight men he puts on them are a little stiff sometimes. ****

Review – Vance, “The Palace of Love”