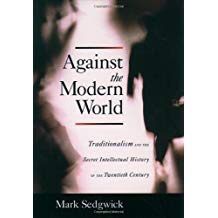 Mark Sedgwick, “Against the Modern World: Traditionalism and the Secret Intellectual History of the Twentieth Century” (2004) – Historians of esoteric or occult thought generally go around with a chip on their shoulder about the way their field is ignored and, allegedly, ridiculed by historians writ large. There’s some truth to it, and some make a good case for the importance of their field to intellectual history writ large- Earl Fontainelle on his very enjoyable podcast, “The SHWEP” (Secret History of Western Esotericism Podcast), for instance. But in some cases the desire to prove that esoteric thought was important, relevant, and like other intellectual movements, with lineages and everything, overwhelms whatever other analytical point a given work might try to make.

In some cases, it looks like a case of a historian being captured by their sources- they begin to sound like the sort of people who insist, not so much that magic is real, but that keep an open mind, and in other cases like the squabbling of the sort of real world occultists they write about, forever going back and forth on who has the legit secret knowledge, etc. They get cute about whether they themselves believe in it or not, as though their personal belief in magic is actually what people care about. Sometimes it’s like “Masters of Atlantis” but not funny.

Historian Mark Sedgwick’s book on the traditionalists is more in the latter camp. Traditionalism is an esoteric philosophy that, as Sedgwick contends, traveled far, especially (well, almost exclusively) in elite circles in the early twentieth century. The basic idea of Traditionalism is this: there is a set of unified spiritual truths that everyone once knew about and that held society — in some far distant prehistoric time — in perfect harmony. Something happened and now we have modernity, which isn’t perfect, unified, or spiritual. Bits of the tradition are scattered amongst the world’s religions and spiritual movements. A spiritual elite should piece together the Tradition for themselves and… well, most of the time, the next step is form clubs and bicker with each other about who’s being properly traditional, but at least some thought about trying to spread the message more broadly. Some of these ideas went into New Age spirituality, though major Traditionalist figures like Guenon, Coomaraswamy or Evola would doubtless sneer mightily at New Agers over… whatever differences they have.

If I already didn’t know about Traditionalism at least a little from prior research, this book would have been borderline incomprehensible. Sedgwick doles out definitions of what they actually believe almost grudgingly. He does very little analysis of the many texts the Traditionalists produced. The bulk of the book is made up of talking about the Traditionalists, how they knew each other, their connections to other belief systems (particularly Sufism, of which Sedgwick is a scholar), etc. etc. This is of little intrinsic interest, especially considering the big claims Sedgwick makes early on of Traditionalism forming a key part of twentieth century intellectual life as proven by the big names who got into it… but the big names basically aren’t there. He goes out of his way to say Carl Jung wasn’t one, appearances to the contrary. That’s about as big as we get, unless Mircea Eliade is an especially big deal to you.

The frustrating thing is, as a peculiar ideology for elites with at least some pull, I could buy an argument for saying that Traditionalism might have had some importance, in much the same way similarly elitist (and basically nonsensical) ideologies like Objectivism have. Sedgwick barely makes it. The closest he comes is the way figures like Eliade and Coomaraswamy helped popularize the idea that all religions have a core of truth (which is the Tradition handed down from olden days) and all are worth studying. That’s interesting, but he doesn’t develop it much.

Similarly, Traditionalism’s connections with fascism and the European far right, as exemplified by the person of Julius Evola, who was in the news recently because Steve Bannon thought to name drop him (if he’s actually gotten through a volume of the Baron’s fatuous oeuvre, I’ll give him… I don’t know, a penny and a shot of Scope to quell the shakes? I’m not giving that guy shit). Sedgwick does the annoying thing New Age people (including Evola’s English translators) do where they try to take Evola’s snobbish disdain for the plebian Mussolini as a sign he wasn’t a fascist. No- if anything, he was just even more violently attached to hierarchy, and put Traditionalism together with racial hierarchies in the most obvious combination since plastic explosives and roofing nails. Sedgwick can’t quite stay away from the story of how Evola-inspired neofascists contributed more than their fair share to the Years of Lead in 1970s Italy- after all, there’s that delicious line about the cops finding an Evola volume in your flat being more damning than if they found C4. But again- it’s stories, anecdotes, connections, no real analysis of the ideas or how they interacted. It’s a shame because Traditionalism and other marginal ideas of that kind have more to tell us if we trace their dynamics than if we try to insist they’re not marginal, or anything else they manifestly are. **

Review – Sedgwick, “Against the Modern World”