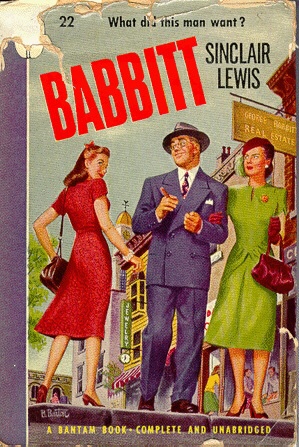 Sinclair Lewis, “Babbitt” (1922) – Did Looney Tunes ever make a joke where Elmer Fudd was hunting a “wascally Babbitt?” Sorry, I promise I won’t start all of my subsequent reviews with dumb jokes. In a way, though, commentators on the American cultural scene have been hunting the Babbitt (:continues in extremely Ride of the Valkyries voice:” hunting da Babbitt, hunting da BAAAAAABBITT”) ever since Sinclair Lewis put up the big ol’ “Babbitt Season” sign in 1922.

Ok, end of the Wabbit-Babbitt jokes, I promise. “Babbitt” was the sensation it was in no small part because it created an instant and enduring symbol of what Sinclair Lewis’s pal and supporter H.L. Mencken called the American “booboisie,” the oafish upper-middle-class. The book’s publication launched editorials about the curse of “babbittry” and publicity campaigns by groups like the Rotary Club to fight back against Lewis’s biting depiction of Business Man. Lewis was the first American to win the Nobel Prize in Literature in no small part due to “Babbitt.” I first heard of the book as a college student reading old essays from “The Baffler,” which especially under Thomas Frank (something of a mark for early 20th century lefty Americana) in the mid-to-late 90’s saw itself as echoing Lewis’s skepticism of an America whose business was business.

We spend over 300 pages almost solely in the headspace of George F. Babbitt, one of the leading real estate salesmen of Zenith, a city assorted midwestern burgs — Cincinnati and Minneapolis being two of the lead candidates — have contended is based on them. Of course, Lewis has his Zenith booboisie spell out for you that Zenith could be any early 20th century American city of the appropriate size run by “solid business ideas” held by “100 per cent Americans” full of “pep,” which is to say, pretty much any American city. Lewis said he was depicting the men who rule America, and I think he has a reasonably good grasp on that, especially for a novelist who was half in the bag most of the time.

Babbitt is in his forties, has a wife, two point five kids, a house, a car, a business, no meaningful money problems, and pretty much no idea in his head other than the received wisdom of his time and place. Lewis seems to have a grand old time riffing on the goofy “swell” booster-talk of Babbitt and his friends and juxtaposing the contradictory ideas — “America’s the greatest place in the world because of its freedom, and we should hang all union agitators” is a typical one — that that kind of deal-maker bullshit patter encourages people to think.

Babbitt does some social climbing; his glib bullshitting, flexible morals, and genuine hatred of people who might upset the applecart, who aren’t “regular fellows,” helps him along into being a major player in Zenith. He also does some rebelling, and it’s unclear whether his rebellion against the conformity that defines him and all of his friends is a genuine movement of what’s left of his soul, just another aspect of his conformity (what’s more white-American-bourgeois-man than deciding that his life is bullshit and he needs to ditch his responsibilities and run away?), or if there’s even a distinction between the two at all. Either way, Babbitt takes up with flappers and flirts with a sort of dippy liberal-radicalism for a few weeks before fleeing back into the bosom of respectable society.

I’ve read that Sinclair Lewis did real research for this book- immersing himself in the world of Booster’s Clubs and car accessories. This is reflected, on the one hand, with the exhaustive range of aspects of the Babbitt-ish lifestyle and mindset he crams into the novel, and on the other, with what reads like a heavy hand. I doubt Lewis was heavy-handed in terms of how boorish or authoritarian middle class WASPs were in his time. I do wonder if they quite so roundly and systematically declared their opinions on the kinds of things Lewis and his readers cared about — socialism, prohibition, the nature of life in America — as Lewis depicts them doing. Babbitt and co are oddly articulate in terms of the things they choose to articulate poorly and when. As the man once said, “people with real lives don’t need to be articulate,” and the whole point of Babbittry is that this — whatever the American upper middle class thinks and feels left to its own devices — is what real life is. Intellectuals often fall down portraying non-intellectuals, but Lewis does pretty well, at least in part because of his own verve and talent, and in part because he’s dealing with the class and milieu that, whether they’ll admit it or not, from which most American intellectuals hail. ****