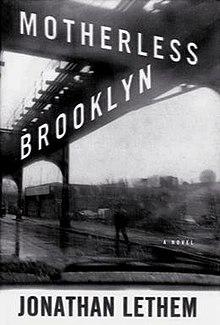 Jonathan Lethem, “Motherless Brooklyn” (1999) – Ok, here’s my question: why did people treat a literary sendup of the tropes of detective fiction like an innovation at the turn of the millennium? They were only a few years out from “Who Framed Roger Rabbit?” Hardboiled detective fiction had been parodied in movies and magazines more or less since its inception, and even the people who wrote it often had a sense of irony about it. Lowbrows did it, highbrows (like Umberto Eco) did it. It was a done thing.

So I don’t know why people flipped their shit when Jonathan Lethem published “Motherless Brooklyn” and showered it with praise and awards. It’s about Lionel, a man with Tourette’s Syndrome who had been orphaned as a child and who was taken under wing (along with three other orphans) by a minor Mafia figure and used for odd jobs. Maybe part of it is that readers of “serious” new fiction like a simple, high-concept hook as much as anyone- “zany detective with — get this! — Tourette’s!” I recall the syndrome being a popular subject of daytime talk shows like Maury at that time, some poor kids on stage uncontrollably cussing and barking…

The second chapter, where Lionel explains his upbringing and the beginning of his experience with Tourette’s, would make a pretty good short story on its own. This is partly because, happening as it does in Lionel’s head, the autobiographical portion doesn’t interrupt the dialogue several times a page with Lionel’s tourettic outbursts (italicized, naturally). These are annoying. “That’s the point!” I can hear the defenders say. Well, A. it’s not like Lethem was trying to illuminate a lived experience of his, so the virtue defense is out B. the blurts are supposed to be a running poetic commentary on what’s going on, but it’s ham-handed and C. it’s fucking annoying.

Lethem has some good turns of phrase amongst his precious bullshit. The plotting is respectable — the old standby of a spiritual body being used for sinister and distinctly materialist purposes — if unevenly spooled out. Mainly, I think the book suffers from an identity crisis. Post-ironic sincerity writers like Lethem always struggle with saying anything about anything other than saying things. He tries to say things about detective stories and literary fiction (and New York and Tourette’s and music etc), but falls between the stools. It’s too dedicated to the quotidian detective story to go full meta-, and too literary to really commit to the detective story qua detective story. Even this could be all right, if the whole conceit of the book didn’t involve spending 300-odd pages with Lethem’s outside take on a disability, which renders everything obnoxious to get through. **’