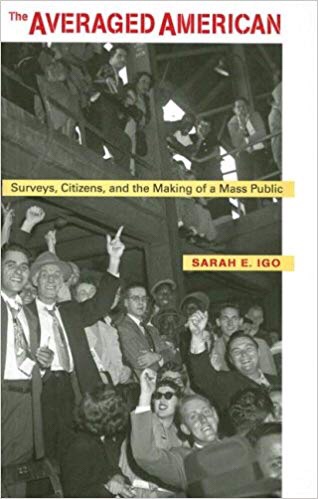 Sarah Igo, “The Averaged American: Surveys, Citizens, and the Making of a Mass Public” (2007) – Historian Sarah Igo makes a pretty good toss at arguing that not just government surveys or academic social science, but public reception of certain social scientific surveys, help define America’s sense of itself in the mid-twentieth century. She focuses on the Lynds, who authored the influential Middletown surveys; pollsters George Gallop and Elmo Roper; and surveyor of sexual habits Alfred Kinsey.

What distinguished these three from early social scientists was their focus on the average. Most 19th and early 20th century anthropologists and sociologists focused on what was seen as marginal and/or deviant: the poor, criminals, minorities, and the “primitive.” The idea of studying average Americans was so unusual most of Igo’s subjects walked into it backwards. Robert and Helen Lynd were originally contracted by the Rockefeller people to study ecumenical cooperation between churches. Gallop and Roper both worked in sales before devising polls as means to create feedback loops between increasingly capital-intensive consumer goods ventures (things like breakfast cereals and cars) and publics. Kinsey was an expert on mud wasps before he got into asking impertinent questions to thousands of people.

As it turns out, Americans from the twenties to the seventies really dug knowing what the average American was like, or, anyway, gazing at a selective picture of what’s “average” or even more iffy, “normal.” The Lynds’ “Middletown” studies became a publishing hit, and even the inhabitants of Muncie, Indiana, the basis of the study, grew proud of their distinction as the scientifically-designated normal American city. The Lynds specifically picked Muncie not because it actually met any statistical norms of the American population, but because it had small immigrant and black populations for an industrial city its size. This actually took some doing to find in America in the 1920s, the period just after the great waves of immigration and smack in the middle of the Great Migration from the American south. Gallop only studied “likely voters,” which ruled out most black people, many immigrants, women in many communities, etc.

It was a normative assumption on these people’s parts — ironically, fostered by the ways in which social science at that time focused on the “deviant” i.e. people who didn’t fit into WASP social scientists idea of normal — that Muncie was the mean. But people ate it up. The same uncertainties about change and modernity that drove social scientists in that period also drove many Americans, including those then as yet aspirationally part of the norm (children of immigrants, for instance), to seek out and embrace a picture of “normal” that ensured them that change would not threaten a social order. This normality became a self-fulfilling prophecy as policymakers — Igo depicts Franklin Roosevelt as an eager consumer of reports about national attitudes — hewed to these pictures when shaping social policy, like the New Deal’s encouragement of single-family homeownership. We’re still living with this picture of “normal” today, even as the cracks become harder to ignore. While a little “dissertation-y,” this book is a fine monograph that gets into an important subject. ****