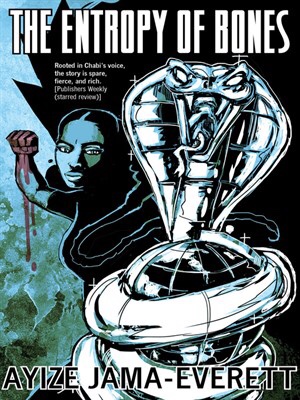 Ayize Jama-Everett, “The Entropy of Bones” (2015) – I’ve seen kung fu movies, but I’d never read a kung fu novel before this one. It’s the story of Chabi, a teenage girl growing up on a houseboat in the Bay Area who, after some training from an eccentric old Indian guy, is capable of running fifty miles in a couple of hours every day and breaking every bone in someone’s body in a matter of seconds. The latter feat is accomplished not by strength tuning in to the titular entropy already extant in the bones themselves. All of this is imparted like it’s obvious common sense, which makes it more fun.

Obviously there’s something special about Chabi in terms of her physical capabilities. She’s also mute, but can speak psychically. This didn’t make much sense to me as a character feature until a minor reveal at the end. The book in general has a kind of loose, almost conversational rhythm, like Jama-Everett is telling you these stories over beers. Loose, but well-structured (like a barroom story one has told many times)- the details of Chabi’s powers, and the world she’s a part of, come out naturally. The world of the story is similarly tossed-together in the best way: entropy beings versus “liminals,” super-powered people like Chabi, and a few demigods and time travel thrown in.

Chabi winds up working for some suspiciously pretty hotel magnates once Narayana, her sensei, disappears on her. She knows there’s something wrong with them but can’t work out what. When a friendly demigod of the wind comes from the future and hips her to the whole entropy-being thing, she puts two and two together and realizes maybe Narayana wasn’t on the side of the continued existence after all, which is a bummer. She gets it together enough to fight a bunch of other superpowered fighters in a big final tournament the baddies put on, but of course she can’t fix the whole thing or there wouldn’t be a future conflict for the wind guy to come back from, would there? No, the forces of rhythm and weed (this guy likes weed) will have to continue to battle the forces of entropy. In all, this book was pretty fun and I’m going to look up some of the rest of his work. ****’

Review- Jama-Everett, “The Entropy of Bones”