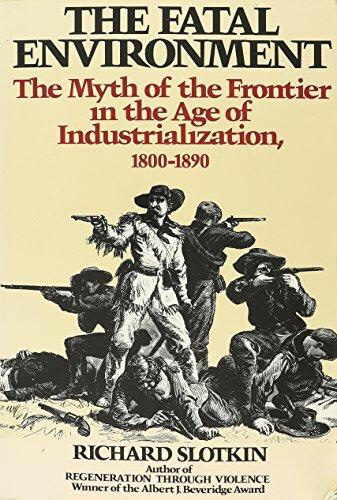 Richard Slotkin, “The Fatal Environment: The Myth of the Frontier in the Age of Industrialization, 1800-1890” (1985) – This is the second in Richard Slotkin’s trilogy of books on the myth of the frontier in American life. This one covers the nineteenth century, and benefits from Slotkin having gotten most of the theory — especially the Jung and Campbell — out of his system in the first volume. Slotkin reads the literature of nineteenth century America — especially the sort of frontier writing we tend to forget but which was much more popular than the rarified names like Melville and Hawthorne we remember — along the lines of the historical crises of the frontier.

The frontier myth — the notion that social conflict can be resolved by people moving to the frontier, wherever it is instead of resolving issues at home — is one of the most powerful ideological solvents we’ve seen in modern history. But it’s considerably more delicate than we appreciate. The frontier can also be seen as a site of degeneration and danger. More pressingly in the nineteenth century, there’s always been the threat of the frontier closing. This was true both in the imagination — how “open” a frontier is is a question of opinion, after all — and in fact. Americans in the mid-nineteenth century were genuinely unsure about their expansive possibilities, between Mexican and British opposition and the sheer size and climatological variance of the trans-Mississippi West.

This led to some interesting ideological fantasies. Some Philadelphian wrote a sort of Philadelphia-apocalypse where, without the safety valve of the west, urban industrial society loses all financial and sexual morality until mobs just roam the street burning everything. Northerners tried to sell the Lowell mills and Southerners tried to pitch the plantations as potential solvents for the sort of social conflict westward expansion was supposed to solve.

Of course, the US wound up stealing half of Mexico and convincing Britain that Oregon wasn’t worth it. But something funny happened- Mexico didn’t quite fit the American frontier fantasy. It was too densely populated- Americans worried that they would wind up like their image of the Spanish, mixing with the Mexicans and ruling them over in a way that degenerated their faculties or whatever the nineteenth century racist jargon would be. Along with that, the Mexican conquest brought in enough territory to set north and south fighting over whose social system would prevail in the spoils, especially California. Both were terrified of a societal collapse if the wrong system prevailed in the west. We know how that wound up.

There’s also a lot of stuff in here about Custer, but truth be told that was less interesting to me. Slotkin is a somewhat “thesis-heavy” writer, and the Custer-as-metaphor thing is something he leans heavy on in the second half of the book. But when he gets away from that, his encyclopedic knowledge of American cultural history returns dividends to the reader. Among other things, I really want to read that Philadelphia apocalypse book and see if it features Gritty. ****’