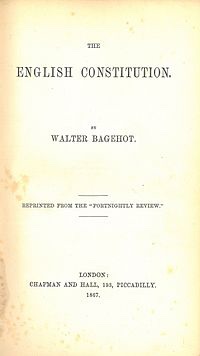 Walter Bagehot, “The English Constitution” (1867) – I read this out of an interest in reactions to democracy in the nineteenth and twentieth centuries. Many would bridle at even getting the word “react,” with its connotations of “reactionary,” so close to Walter Bagehot, such a liberal touchstone the Economist (which Bagehot edited) has a column named after him. I cede the differences between him and your “real” reactionaries but he is part of an early draft of the great western freakout about the masses and power.

I expected this to be more historical, but it is in fact a description of how Bagehot saw the English constitution as working when he was writing, just before the second big Reform Act hit that would grant something resembling universal manhood suffrage to the British people. It was also at or near the peak of British prestige on the world stage. Bagehot placed much of the success of the British government on the cabinet system — which united legislative and executive functions, he has no time for separation of power — and the differing but complementary effective and “dignified” parts of government, the latter including the House of Lords and the monarchy. The effective parts of the state, notionally democratic but really controlled by the best people with a stake in the system, took care of the effective bits, whilst the dignified parts of the state, while explicitly undemocratic, actually brought the masses in to the system by appealing to some supposed universal human penchant for mystery and ritual.

For a great liberal, he goes back to conservative talking points about the nature of the people and governance quite frequently. This is just how people (sometimes the British in specific, sometimes everyone) just are and will always remain. For one thing, it ignored a lot of what was going on with the working classes in Britain, who as E.P. Thompson showed were engaged in a flurry of self-education and had been for most of a century by the time Bagehot was writing. Secondly, like I was lamenting earlier, these figures never make clear what, exactly, about elite education really makes them the only ones who can govern. If anything, much of their education was wildly impractical, which just goes to show nobody is entirely ignorant of their own interest, American voting behavior notwithstanding. But in the end, even if you accept the general premise or take it as a given for this kind of literature, Bagehot — and in my experience, British reactionaries, conservatives, and conservative-liberals (with few honorable exceptions, like Wyndham Lewis) do not bring the same analytical depth or literary imagination to bear on their reactionary visions as their continental counterparts did. I tend to assume this is because the British were so much stronger and more complacent during the nineteenth century, and it seems to me that Bagehot exemplifies this- the sort of attitude the Economist tries to cop. ***