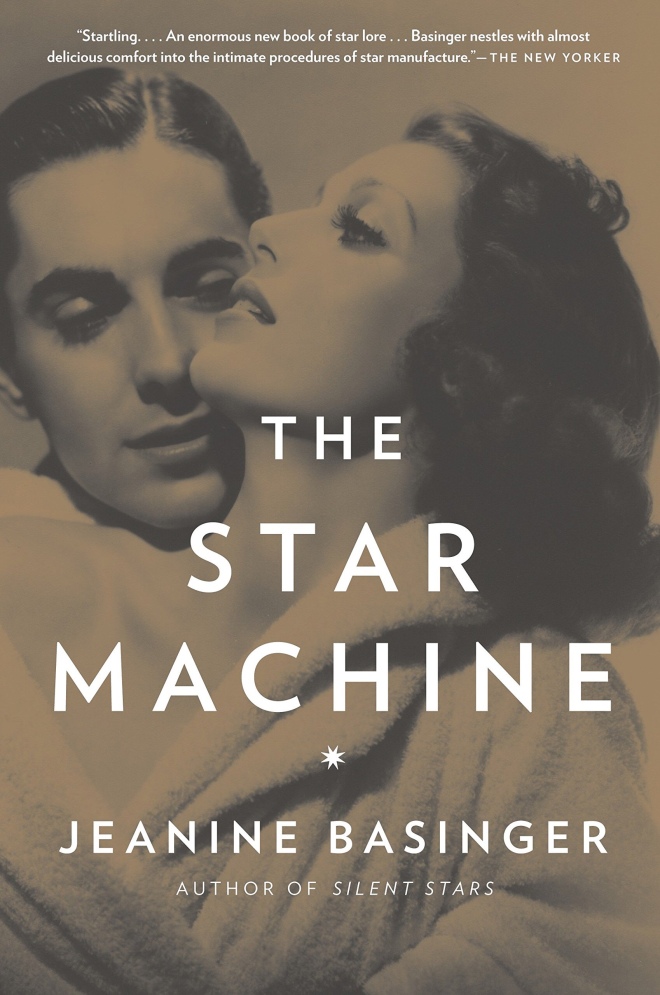 Jeanine Basinger, “The Star Machine” (2007) – A tome both weighty and flighty… like an airbus? One of the doyennes of American film studies talks about stars at the heyday of the Hollywood studio system, from the 1930s to the late 1950s. A big book, it attempts to tackle the concept of stardom from both a systemic and an individual approach. The beginning and end describe the titular Star Machine — how the studios made stars and built their profit engine around them — while the middle looks at individual stars and how they fit, or didn’t, into the system.

Me being me I preferred the systemic look. That’s why I picked up this book- Hollywood glamour leaves me indifferent but I am interested in systems of sorting and developing the human subject. The case study of early Hollywood, where shrewd but uneducated men developed such a system catch as catch can under massive fiscal pressure, strikes me as one well worth studying. Basinger delivers the goods in her early chapters, going in to how the studios used a sort of vulgar empiricism to work out successful formulae for developing and maintaining stars. That’s where fanzines came from, for instance- a feedback mechanism for the studios to figure out what was working and what wasn’t. Ultimately, the studios needed to do that most difficult polisci task- they needed to routinize charisma. Basinger depicts them as knowing they couldn’t do that all of the way, and that frustrations developed by this neurotic process helped create some of the bizarre dictatorial behaviors for which studio bosses were known.

I learned a lot in this book but was thrown too many facts about the lives of Tyrone Power, Irene Dunne, and dozens of other old Hollywood types — many of whom I had never heard of before — than I could possibly take on board. Basinger is clearly a great enthusiast for this period of Hollywood history. That enthusiasm, expressed in amusing asides to the reader and buckets of information drawn from her seemingly limitless well of Hollywood lore — is infectious- up to a point. The enthusiasm is great, I enjoyed the learned but conversational tone of a great scholar allowed to cut loose. But it was a lot, and it wasn’t always clear what point she was making. This was compounded by the ways in which the stars she profiled stand out from the other stars mainly due to nebulous subjective qualities of being apart from the studio system (which still defined their lives). Mostly, I think Basinger wanted to write about some stars. That’s cool, and she carries it off with enough brio to make it worthwhile even to a stodgy old materialist like me, but I’m more in it for the systems than the stars, alas. ****’