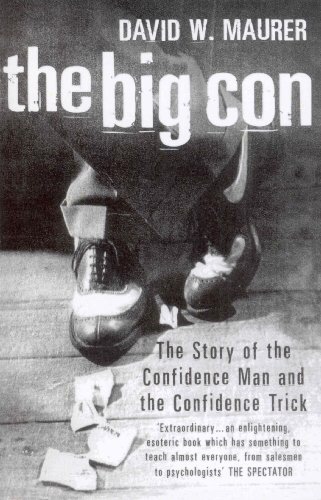 David Maurer, “The Big Con: the Story of the Confidence Man” (1940) – Who doesn’t like old-timey flim-flam men? David Maurer was a linguist who approached the underworld of his time in search of its peculiar argot. Along the way, he got to know dozens of con men, who became his sources for this book. As the title promises, it focuses on the “big” con games, defined by “the send” – the act of sending the mark home to get more money. Ten thousand dollars was considered the minimum score for a big con, and Maurer regales us with tales — typically told by the conmen themselves in their dialect — of routinely taking rich men for hundreds of thousands of dollars, back in the twenties and thirties when that was the equivalent of millions.

Maurer lingers on the details of the craft: the division of labor within the con mobs, the rules of the different games (which all seemed pretty much the same to me- maybe I’m just a poor mark!), the setup of “stores”: fake gambling clubs and stock brokerages where ropers took marks to get fleeced. More than the simpler short cons, the big con relies on the complicity of the mark. Everything about the mob’s performance and the shop setting is designed to “stir the larceny in the mark’s blood.” “You can’t cheat an honest man,” they say- all the games rely on telling the mark that the conmen are bringing them in on the real, i.e. underhanded, way to make big money. They make use of the greed and pride of men who fancy themselves big wheels because favored by the big game of capitalism, but who have niggling suspicions that they’re not in on the real action.

Maurer sued the makers of the movie “The Sting” for allegedly ripping off his book (they settled out of court). You can see why- I thought the elaborate fake storefront they used in that movie was unrealistic, but I guess not. You already need a big bankroll to start a big con game, to pay for premises, help, and fixing the police. That’s another way the con games mirror capitalism as a whole- those with the money to start with are in the best position to gain more. I wonder what an updated version looks like- as far as I can tell, the big con has mostly turned into stock swindles, and the short con is everywhere online, but who knows? Either way, a good read both in content and tone. ****’