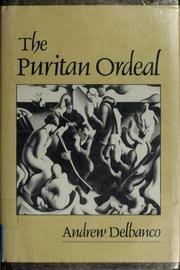 Andrew Delbanco, “The Puritan Ordeal” (1989) – I think I’m stuck with the Puritans the same way other people see themselves stuck with their lineages. Which is funny, because my actual lineage is a rogues gallery of the sorts of Catholics the Puritans feared and loathed most, along with Jews, who the Puritans thought they had essentially replaced. I don’t believe in blood magic but I do believe in history, not just as something taught in schools but something written into the texture of everyday life.

I’m not going to pretend that over and above everything else, I’m not a product of late twentieth century undifferentiated American capitalist culture. But New England, one way or another, shapes my thoughts, expectations, etc., in a way I relate to when, say, John Dolan writes about California. The Puritans loom over New England in a weak echo of the way God loomed over the Puritans. Several major habituses — from the urban ethnic one pioneered by the Irish the Puritans despised to the suburban liberalism that the Puritans’ descendants played a strong role in shaping — have developed to give New England a culture specifically in reaction to the problems in Puritanism. They’ve by and succeeded but the Puritan grapple with God, man, and time still lives on. It’s there in the way the towns are set up, in the weather, the way people interact, what you learn when you’re little, the niggling worries about abstractions in the back of your head.

I think I’m also stuck with the early American Studies scholars, despite the fact I agree with them about as much as I agree with seventeenth century Calvinism. I still find myself pulling their books or books about them from shelves. Another set of overachieving ancestors who were wrong-headed in some fundamental ways, they also baked themselves into the definition of American culture even as they were writing about how the Puritans did the same thing. Both had a faith in the power of canonical texts that verged on the psychotic. Part of me wonders if both weren’t playing some deeper game, the kind of thing you could make a scifi plot out of… the Puritans are much likelier and more interesting candidates for protagonists, I grant.

Well, anyway, this book. Not strictly an early American Studies text but something of a throwback; Andrew Delbanco, later to become Melville’s biographer, writing an exegesis on Puritan spiritual/social practice while the 1980s culture war raged all around him. His main argument is that while the Puritans are (again, for the most part rightly- there’s good reason to dislike them) associated with the idea of evil as a force in and of itself, operative in the world, that earlier on many of them were believers in Augustine’s idea of evil as the absence of good, or privative evil as it’s called. This carries along with it an idea of human perfectibility that is far from the dour self-hatred we associate with the Puritans from Hawthorne and the witch trials. The fall from this privative sensibility and millenarian vision, Delbanco argues, came with the pressures on the new colony and the efforts of its leaders to control it socially.

He makes a broader point about immigrant generations, citing the way immigrant Jews often felt that their American-born children fell away from the truth and the way immigrant children feel small next to their ancestors. This sounds like an overgeneralization. But I think, in his… knowing, half-ironically filiopietistic Nth generation American Studies way, Delbanco got at something of the way the Puritans achieved their remarkable “stickiness,” to use some Silicon Valley jargon. They colonized not just this cold appendage of America, but the whole practice of relating introspection to social structure, as undisentangleable as western philosophy is from what a few Athenians thought a long time ago. I don’t think it’s just me and a few other pedants stuck with them, in the end. ****’