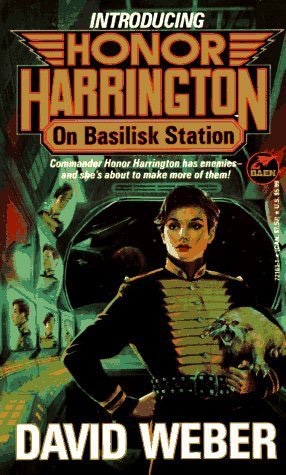 David Weber, “On Basilisk Station” (1993) – I figured I should take a crack at reading this, the first volume in the flagship series by the doyen of military scifi. In a way, this is a case of truth in advertising. It really is “military” scifi, as opposed to war scifi or action scifi, because a lot of it has to do with bureaucracy, procurement, chain of command drama, etc, the stuff of quotidian life in any military. There’s not a shot fired in anger in the first two hundred pages!

Instead, you get long descriptions of space ships and their weaponry. You get the travails of young commander Honor Harrington (presumably a descendant of Michael, continuing the socdem tradition of being soft on imperialism) as vindictive space-naval bureaucrats exile her and her ship to a remote station. Her crew dislikes her, she hasn’t got enough ships to do her job, blah blah. She serves the navy of Manticore, space-Britain to the nefarious space-Napoleonic-France of Haven, which has to conquer planets to keep its darn welfare state going. The natives are getting restless and of course no one bothers to explain why they’re bothering natives on the nearby planet when all they want is an adjacent wormhole, etc etc. Eventually the bad guys, whose only motivation is nefariousness, spring their trap, Honor proves everyone wrong, and we move on to the inevitable sequels.

Look: I’m fine with either one or the other. If it’s gonna be raygun space battles, cool (though over-adherence to a Napoleonic model of naval battles transferred to space makes everything a little stilted). I also could get into a story of someone organizing things in spite of limited resources, bureaucratic interference, etc. But we get half-assed versions of both with cardboard stock characters and uninteresting worldbuilding. It baffles me this is as popular as it is, not because it’s so awful (it beats “Starship Troopers” in novel form, for my money- at least Weber doesn’t preach, though he is literally a Methodist preacher), but because military scifi is held up as the populist, exciting counterpart to “ideas” scifi. But it’s not that exciting! LeGuin, Delany, Jemisin etc offer at least as much action and derring-do. Do the later Honor novels ramp it up? I don’t know and only curiosity about the shape of the genre would make me find out. **