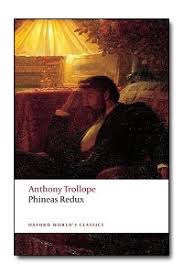 Anthony Trollope, “Phineas Redux” (1873) – The British reading public must have been clamoring for more of that Phineas Finn character from one of Trollope’s previous Victorian novels of manners and institutions, because he delivered nearly six hundred fresh pages on the Irish sometimes-parliamentarian a few years later. This is the fourth book in the Palliser series, where Trollope explores the intersection between social life and parliamentary politics, in settings split between the capital and various country estates.

This one takes an odd turn halfway through. For the first half, the titular Phineas is worried getting elected to parliament (from a newly-enfranchised industrial town) and then worried about getting a cabinet office, while various side characters worry about marriages and hunting arrangements. The big drama appears to be that an old flame’s estranged husband is going crazy towards him. Then, Phineas’s rival Bonteen is murdered in the street, and (circumstantial) evidence points to Phineas Finn! And so we get an extended evidence-and-trial section of the book. Probably the most interesting part is where Trollope puts his opinions on contemporary British public life in the mouth of a brassy old public defender, and insists that midcentury mealy-mouthedness made most verdicts mere business propositions, not real judgments of public morals, etc.

As such, no one (except a few of his enemies) really wants to hang Phineas, but he might hang anyway because of a system no one has in hand. Characteristically for Trollope, it’s willful women who take a hand when Phineas’s fan club of upper echelon ladies produce evidence as to his innocence. He then marries one of them, spurning his old flame (truth be told I rooted for the one he married, the other was kind of morose and annoying), and things go back to Trollope-normal. The joy of Trollope is usually in his cutting analysis of Victorian society and that wasn’t as present here, except for the court system, but it was still basically a fine addition to his synoptic picture of bourgeois British society at the time. ***