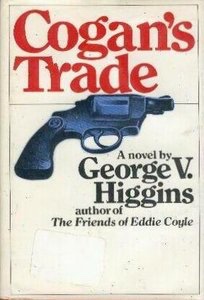 George Higgins, “Cogan’s Trade” (1974) – George Higgins was a Boston College law professor and, according to Wikipedia anyway, “raconteur” who also wrote numerous crime novels set in Boston. He’s credited with helping form the crime-fiction picture of Boston that’s now so popular in books and movies: a gritty world where all the institutions are connected by corruption and inhabited by highly verbal crooks, and where nearly everyone, in contrast to actual Boston, is white. I can’t say whether Higgins first charted this territory in crime fiction but he definitely shaped it for inheritors like Dennis Lehane.

One thing Lehane didn’t do, to the best of my knowledge anyway, is write a novel almost entirely out of dialogue, like Higgins did in “Cogan’s Trade.” The plot is sparse — low-level hoods rob a card game, the city’s organized crime element tracks them down and kills them — and doesn’t seem to be the point of the exercise. Instead, we’re treated to long dialogues between characters on various sides of this interaction, their attempts at planning crimes and surmounting the inconveniences put in their way, and just generally shooting the shit. The dialogue is very “authentic,” i.e., stylized differently than middle class “realist” fiction and generally more uncouth. The dialogues halt for brief moments for actual crimes to be committed and then picks up again.

I’ll probably read more Higgins because I’m curious about the genealogy of genre depictions of Boston, but this didn’t do much for me. Like any middle-class crime fiction reader, I like to rubberneck at the low life, but this feels especially low-stakes. There’s only so many conversations about characters who aren’t really present in the story or about having sex with sex workers or stealing dogs that I want to sit through. It got tedious and that’s a cardinal sin in crime fiction, the kind of thing a Lehane character (though not a Higgins, from this sample) would feel somewhat overdone catholic guilt for. There’s an admirable consistency to the whole thing — keeping it if not real than real to the reality of the world Higgins builds — but it ultimately amounts to little in this instance. **’