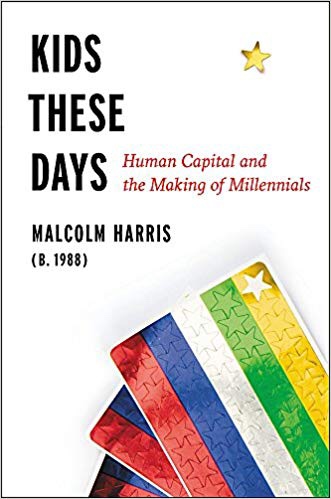 Malcolm Harris, “Kids These Days: Human Capital and the Making of Millennials” (2017) – Millennials! What remains to be said about them- about us, I should say? Well, “anything based on the facts of socioeconomic structure as opposed to stereotypes” might be the answer to that, and that’s what Malcolm Harris does in this book. He’s not a sociologist himself- he’s a millennial scribbler, part of the New Inquiry posse, not my favorite internet clique by a long shot. But little of their preciousness or obscurantism finds its way into “Kids These Days.” Harris instead sticks to the literature produced by sociologists and economists and connects it to a set of dynamics he doggedly sticks to. This is a practical book, praise be.

Productivity goes up- wages stay stagnant. Productivity goes up, wages stay stagnant. Spool that out in its implications and apply it to the other (epi)-phenomena you find, and you have an explanation of Millennials that actually makes sense and isn’t insulting or insultingly simple-minded. Millennials are some of the most intensely capitalized people ever produced, almost engineered to be pliant, highly productive workers in a capitalist system where the rate of change is ever-accelerating. Every generational change from intensive parenting to high-stakes testing regimes to over-policing has worked to produce workers adaptive to late capitalism- and to keep them from changing it.

It’s simple and convincing. What are participation trophies if not previews of the cheap (or free) quasi-rewards we get in lieu of better wages or shorter hours to go with our increasing productivity, ala free breakroom cereal? What’s phone addiction other than a generation unable to let go of its productivity-boosting tools for an hour, always being “on”? Boosting human capital is the one answer politicians, pundits, and for the most part parents have to the question of securing a decent life for the youth. But what happens when the qualified pool of labor expands — and it has, we’re the most schooled generation in history — but opportunities shrink? We’re finding out, and it’s not pretty. Harris sketches out some fun future scenarios including student-debt-peonage and climate apartheid.

Harris doesn’t, as they say, provide easy answers to this. In his final chapter he goes through the standard responses we’re told to try for unjust situations, from ethical buying to protest, and finds them all thwarted by the same logic that produced millennials in the first place- the logic of capital, with its main concomitant the terror of the carceral state. Harris doesn’t come out and say “revolution” as the alternative — if nothing else, the lack of popular organization and scariness of our police state come up often enough in the book — but he does call himself a communist before anything else in his “about the author.” Whatever it looks like, we need to come up with something, soon. ****’