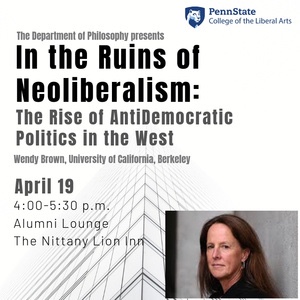 Wendy Brown, “In the Ruins of Neoliberalism: the Rise of Antidemocratic Politics in the West” (2019) – One of the major theorists around these days takes a whack at defining These Times and the rise of the far right. I’d argue Brown does a better job than any of the other cracks out there, but the form it takes — short critical theoretical interventions — has its limitations.

As the subtitle promises, Wendy Brown frames the rise of the far right as an assault on democracy, already controversial as far as These Timesers are concerned, scared as they are of populism and “illiberal democracy.” In part, Brown elides them definitionally, arguing that democracy means equality and that whatever today’s moment about, it isn’t about equality in any meaningful sense. I happen to think she’s right that democracy, to be substantial, involves a downward distribution and equalization of power, but I know that’s not necessarily the agreed-upon definition.

Anyway… what is threatening democracy so? Brown’s most arresting image is of today’s far right as neoliberalism’s Frankenstein monster. The classical neoliberal thinkers did not have this in mind. Brown musters the latest work on neoliberalism, most notably that of Quinn Slobodian on the state and Melinda Cooper on moral politics, to argue that neoliberalism sought to encase an order defined by markets and traditional morality (somewhat underdefined in the lit, alas) from popular pressure. This included popular pressure from the right. But neoliberalism broke down so many social solidarities and so weakened democratic forces that, like ancient diseases emerging from the melting permafrost (my image, not hers), forces of rage and hatred neoliberalism thought it had short-circuited have arisen to remake the future in their image.

Her argument seems to be that neoliberalism essentially wanted an escape from politics, or anyway to contain politics in a little box that had minimum output onto (and in some cases maximum input from) markets and morals. But the repressed has a way of returning, and the political — the drive to define and use power — finds its way back, especially given how weak many neoliberal regimes have turned out to be. There’s some smidgen of hope there — liberatory politics, too, have made a comeback — but it could be too little, too late, against the anti-democratic forces over which neoliberalism has lost control. This, in short, “scans” as correct to me, and as a useful framing for further discussion.

Brown choices of material on which to dwell are interesting. She spends a lot of time getting her neoliberalism ducks in a row, correcting her previous work, “Undoing the Demos,” which largely ignored the moral elements of neoliberalism, and showing the ways different strains of the ideology both sought to undo democracy and avoid the sort of mass action on the right we see today. Her emphasis here is on the intellectual architects of neoliberalism- Friedrich von Hayek, Milton Friedman, the German ordoliberals. I wonder if it would have made a difference if she looked more at neoliberalism in the field, throughout the world. Jumping perhaps unfairly to the most dramatic example, she might have made use of Chile, which involved a certain amount of mobilization of popular right-wing sentiment. She’s also a legal expert and spends a lot of time with court cases, which was interesting in terms of its reconstruction of the logic of the neoliberal subject, but also at times more opaque than the rest of this work.

Brown goes a long way here towards giving a theoretical frame to further study of the contemporary far right. It’s interesting that she avoids the big “f-word,” fascism- popular anti-democratic politics sounds like a decent succinct definition to me. She probably avoided more trouble than wading into the fascism-definition game is worth. But I do think getting more into the historical specifics, which the example of fascism makes one do, would have strengthened this book. It’s not just fascism, either. Some sampling of the different ways both neoliberalism and its noxious spawn vary between times and places, outside of what she did on their intellectual pedigrees, also would have made for a robust work, closer to whatever unicorn of a book on the right I’m chasing. But helping define the question as Brown does here is surely a step in the right direction. ****’

Review- Brown, “In the Ruins of Neoliberalism”