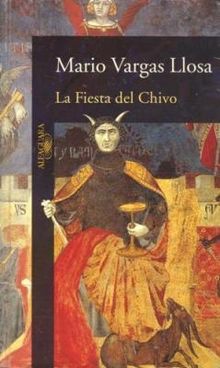 Mario Vargas Llosa, “The Feast of the Goat” (2000) (translated from the Spanish by Edith Grossman) – “The Feast of the Goat” apparently belongs to a Latin American subgenre of “dictatorship novels,” which makes sense. More than any of its particular viewpoint characters, the main character of the book is the dictatorship of Rafael Leonidas Trujillo Molina over the Dominican Republic from the thirties to the sixties. Trujillo and his regime were like a parody of the caudillo figure and caudillismo. He renamed one of the oldest Spanish cities in the Americas, Santo Domingo, Ciudad Trujillo after himself; he instituted a cult of his family, even as his brothers and sons proved to be worthless playboys and thugs; he took part personally in the destruction of dissidents and the humiliation of members of his inner circle, most notoriously by seducing/raping the wives and daughters of both associates and opponents alike. There’s a waft of macho oversexedness around the whole thing, diplomats chosen at least in part due to their international playboy credentials, etc., though it’s worth noting the two literary sources I have on the Trujillato are Vargas Llosa and Junot Diaz- both somewhat hierophantical men. It’d be interesting to get other perspectives.

Either way, Vargas Llosa draws the reader into (his version of) the logic of the Trujillato. Like dictatorships generally do, this one ran on complicity. Trujillo had something on everyone in the elite, some hook of interest, and kept the masses on side through bread and circuses, the latter including the periodical humiliation of those in the regime itself. In chapters dedicated to the men who would eventually end the Trujillato by ending Trujillo himself, we see the crises of conscience even dedicated opponents felt, from religious scruples to knowledge of how much they owed Trujillo personally.

The other chapters are told from the perspective of Trujillo himself and of a woman, Urania, a daughter of a Trujillo flunky. She left the Dominican Republic as a child during Trujillo’s last year and came back in the nineties. As Trujillo goes through his last day and Urania explains to her family why she abandoned the Republic, the two stories come together, I don’t want to say predictably but congruously. These are both the most affecting chapters and the ones where Vargas Llosa’s peculiar take on dictatorship comes out the most.

Vargas Llosa wrote this decades into his neoliberal turn, after disappointments with Castro and the terror of Sendero Luminosa drove him from his youthful leftism. And the Trujillo dictatorship, with its nitty gritty personalistic terror elements, fits with the essentially apolitical picture of dictatorship Vargas Llosa paints. There are references to the anticommunism and racism (mostly against Haitians) that animated the Trujillato, but in the end it’s about Trujillo and his manhood running roughshod over a whole country- essentially apolitical, or maybe that’s what politics is in Vargas Llosa’s telling. This extends to Trujillo’s very last day, where he goes to his death due to his inability to impose his manhood, in the most middle-aged-male-writer’s-version-of-events way possible, on young Urania (though he was quite capable of traumatizing her mercilessly). Live by the dick, die by the dick, I suppose- though something tells me the Americans didn’t support Trujillo all that time for his bedroom exploits. That was because he was a reliable anticommunist, and they withdrew that support when he refused to play well with others in Washington’s anticommunist orbit.

That said, this is still a great novel, technically accomplished in an unobtrusive way with the way Vargas Llosa ties the various narrative strains together. Put it in the category of politically-questionable classics. *****

Review- Vargas Llosa, “The Feast of the Goat”