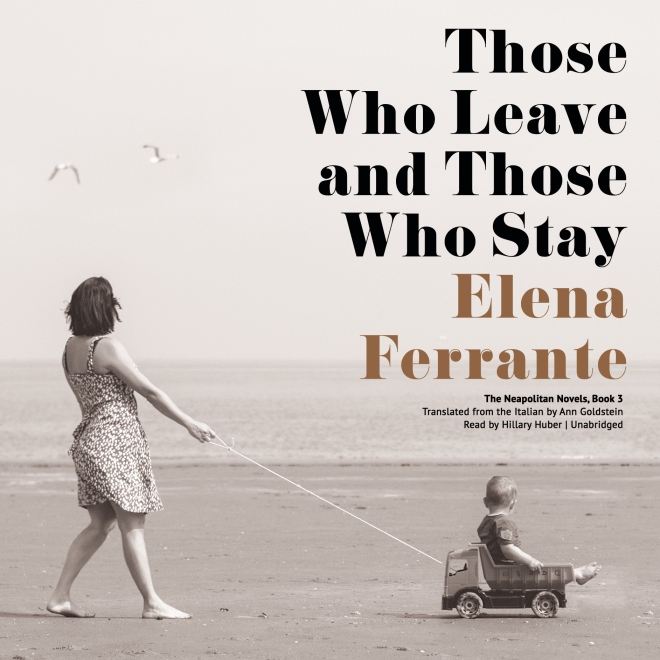 Elena Ferrante, “Those Who Leave and Those Who Stay” (2013) (translated from the Italian by Ann Goldstein) –

Three books in to the Neapolitan Quartet; what can I say? One easy way of getting my point across is simply to say that the praise for the series is entirely justified. Ferrante works several miracles that would each be impressive on their own, never mind all at once. There’s the world of fully-realized, consistent, but often surprising, characters drawn from the Naples neighborhood where the characters start (and from the academic and political worlds the narrator finds herself in). There’s the way she encapsulates the broad sweep of the last sixty years of history and a lot of sophisticated ideas about politics, gender, the family, etc. in a narrative where it never feels forced. The prose is forceful and lucid throughout, no “writerly” bs, and Ferrante can write a twist or a cliffhanger like the best pulp writer, a welcome treat. And at the core, the story of the two friends, Lenu and Lila, is… just very good. Sorry, out of superlatives. Basically anyone who has had a serious friendship will recognize parts of it in theirs, but with a clarity and force that’s almost resentment-inducing.

I don’t know if comparing it to the other books is helpful, I tend to see them as one big book. This one covers the late sixties and early seventies, most of which sees Lenu in Florence and Lila in Naples, so the narrative is more bifurcated than usual. Both struggle with the turmoil of the Years of Lead, in Lila’s case through very granular, disorganized struggle at a factory, which was fascinating to read. So, uh, yeah… it’s good. Read the Neapolitan Quartet (start at the beginning) if you have any interest in novels qua novels. *****

Review: Ferrante, “Those Who Leave And Those Who Stay”