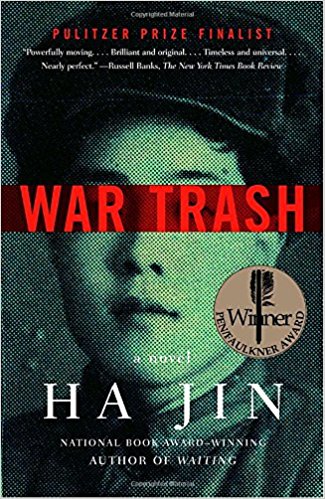 Ha Jin, “War Trash” (2004) – This is a pretty good novel set during the Korean War. The protagonist is a Chinese “volunteer” officer who is captured by the Americans. I’ve read a few memoirs and novels about war by people who were there, and I suspect Ha Jin has too. He gets across a lot of the main themes you get from works from people who actually go through war and/or internment: confusion; weariness, and especially hunger, and the concomitant joy of food; small funny moments in what is largely a very bleak world; complex social dynamics driven by despair, officiousness, and petty sadism. You don’t get the fake redemptive narratives or triumphalism or other sentimentalisms you get in war writing from those who write about it from a distance (see: Hollywood).

The human element in “War Trash” mainly plays out in the dilemma faced by Yu Yuan, the main character- align himself with the Communists, who run his homeland, or the Nationalists, who run the camps with the connivance of the Americans. Yuan mostly just wants to go home to his fiancée and mother and is not notably ideological. War and camp conditions make both sides bitter, fierce, and vindictive. There’s a theatricality to the Nationalists’ atrocities — showy torture-killings of those prisoners who’d rather go home to China rather than repatriate to Chiang’s Taiwan, forcibly tattooing waverers with anticommunist slogans to make it impossible to send them home — lacking in their Communist counterparts. That, and his desire to return to the mainland, send Yuan to the Communists. They’re depicted as having their shit together, relatively speaking. But ideology has its costs- knowing that they’re depicted back home as traitors and insufficient communists for the crime of having been captured, the communist leaders in the camp mount increasingly foolhardy and bloody resistance campaigns, getting dozens of their own people killed for pretty much nothing and ruthlessly suppressing criticism.

In the end, it’s all for nothing- the war ends, the prisoners are repatriated, and for all the sacrifices the communist prisoners made to resist their captors, they’re still treated as officially suspect. If anything, it’s easier for Yuan, not having been a party member before- he had less to live up to. Yuan is depicted as writing the story as a memoir when he’s an old man in America, staying with his kids. The Americans in “War Trash” come off as somewhat ignorant and childish — one of the officers who interrogated Yuan at one point has a plaster bust of his own stupid head he paid a prisoner to make — but the closest to satisfaction Yuan finds is sending his kids to their country for school and then going himself. This might borrow from Ha Jin’s own experience- one of the major literary figures of the generation that came to prominence around the Tiananmen Square massacre, he currently teaches at BU and lives, in all places, in my hometown of Foxborough. These sort of war stories usually lack a “good” Hollywood resolution, and this ones not an exception. ****