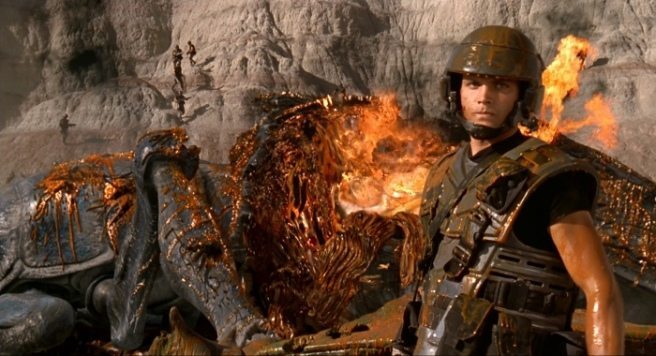 Robert Heinlein, “Starship Troopers” (1959) – At bottom, science fiction is about exploring possibilities. The corpus of scifi has explored an exhaustive range of facets of existence, playing with everything from consumer technology to the structures of race and gender to the nature of time and space, in the full range of emotional registers. And it’s a project shared across the spectrum of writers, from exalted masters ala Le Guin, Delaney, and Dick to the lowliest fanfic scribbler. It’s genuinely one of the nice things about the twentieth century, warts and all, and one of the few we actually got to keep, in a real, vital way, in to the twenty-first.

So what possibilities does acclaimed science fiction icon Robert Heinlein imagine for us in “Starship Troopers,” then? Where does he go from that established jumping-off point for limitless possibility, humanity’s exploration of the stars? Well, mostly, he imagines boot camp. Endless endless boot camp, described by Heinlein’s impersonation of a happy-go-lucky grunt (Heinlein was an Annapolis grad and a navy officer who never saw combat), an update of Rudyard Kipling’s cockney Tommy ventriloquism. There’s a huge war in space going on — multiple wars, it seems — but none of that matters except as a rationale for boot camp and for a society seemingly organized around boot camp. There’s maybe fifteen pages of battle in the whole book, including maybe ten pages in the beginning. The rest is boot camp, and a lot of that is actually lectures about life and society. This is closer to a pedagogical novel than a war story.

The content of these lectures Heinlein puts in the voice of older authority figures bestowing wisdom unto the perspective-dullard — the primacy of force and the existential validity of its wielders — is less off-putting than the tone and context in which it’s delivered. Heinlein may have seen himself as critiquing late-1950s consumer society but his philosophers of the spartan life speak like they came off the tv of his period; bluff, bouncy schmaltz, scout-master-meets-snake-oil salesman. The society in which Heinlein’s rules have been applied — only veterans can vote, corporal punishment is liberally applied, and most of all, old fucks who think like him are paid and encouraged to babble at length and totally own anyone who challenges them — isn’t really all that different from the society in which Heinlein lived, except people are as a whole happier. Sometimes evil aliens will paste a city but we all know the powersuit boys will paste them right back (not that Heinlein is going to let us enjoy much of it).

What that contrast tells me is that Heinlein means it. He’s not doing a thought experiment, he’s not doing satire, we don’t need to apply “Niven’s Rule” (Niven was another middlebrow fascist slug, anyway) of separating the views of the author from the views of the narrator. If this shit was imaginary for him, he’d try extending his imagination. If anything, the idea of “service-guarantees-citizenship” is much less grotesque than the combination of unimaginativeness, dullness (seriously- just give us some fucking space battles, dude), and chipper banality with which his ideas are expressed.

The militarism is just a vehicle for what Heinlein really cares about in this book- the defense and extension of a world that suits him (1950s America but a little hornier and in space), and the humiliation and extinction of people with ideas that make him uncomfortable. To be honest, I think the dynamic we see here — people smart enough to think about the world around them but deeply scared of the implications of what they think seeking intellectualized schmaltz to form a security blanket — drives an increasing amount of right-wing thought today. It’s a sad irony a lot of those people invest in science fiction, which is supposed to be about impetuous imagination.

I wanted to like this book, or at least like it a little more than I did. I like a lot of work I disagree with much more than the actual content of this book (the boy scout tone really is skin-crawlingly off for me, I’ll admit). Heinlein also helped keep Philip K. Dick solvent, even after PKD made fun of him all the time, so I want to like the guy. He seems like a good sport. And there are a lot of great right-leaning speculative fiction writers: Lovecraft, Tolkien, Herbert, Vance, Wolfe, Simmons, Stephenson. They create imaginative worlds, mount incisive criticisms, weave intricate plots, are compelling writers. None of this applies to “Starship Troopers” (and only applied a little bit more to “Stranger In A Strange Land,” the only other Heinlein I’ve read, which is best described as “‘Starship Troopers’ for horniness instead of the military”).

Paul Verhoeven showed a much greater degree of fealty to what science fiction is supposed to be about when he took this dull book for raw material for an actually great scifi movie, which is a brilliant satire of the fascist undercurrents both in the book (and scifi in general) and in our society. The movie has humor, it has the courage and brio of Verhoeven’s insane choice to make a movie undermining it’s own source material in what’s supposed to be a dumb action movie, and it has actual… space… battles which, I’d like to stress, the novel basically lacked. Having read the source material, I can now definitively say “Starship Troopers” beats out “The Godfather” or “Children of Men” for the ultimate case of a movie being better than the book.

Gotta say… nothing disappoints more than getting boring fascism when you expect the more interesting literary kind. *’