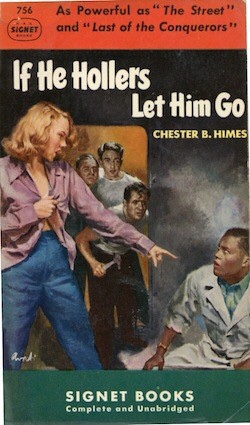 Chester Himes, “If He Hollers Let Him Go” (1945) – Chester Himes takes us through the deeply uncomfortable racial atmosphere of Los Angeles during the Second World War in this, his first novel. Bob Johnson, the main character, works on building warships. Both black and white migrants from the South crowd Los Angeles and his workplace, causing the prevailing racism to reach a degree of ubiquity that haunts every action and interaction at Johnson’s workplace and elsewhere. Living in space involuntarily vacated by interned Japanese, Bob and other black workers work in segregated crews, most often with white leaders. Bob, who has had some college, is appointed the first black crew leader, a sort of experiment on the part of paternalistic management. This does nothing to ease the racial tensions on the production floor, as Bob is continually stonewalled by white colleagues when he needs their cooperation. Sex enters the mix as well- no one (other than some ineffectual Communist sympathizers) is willing to touch the toxic dynamic created by racist white women workers taking advantage of their position to terrorize black male coworkers. Bob’s resentments and desires intertwine to make both volatile- he considers killing a white coworker who attacked him during a card game, has a messed-up relationship with a woman from LA’s tiny black elite, and in general can never figure out if he wants to be accepted by society or to blow it all off. In the end, he gets the fate he had been trying to dodge- a forced enrollment in a Jim Crow institution, acceptance of a racist society whether he’s willing or not. A vivid, compelling read. ****’

Review- Himes, “If He Hollers Let Him Go”