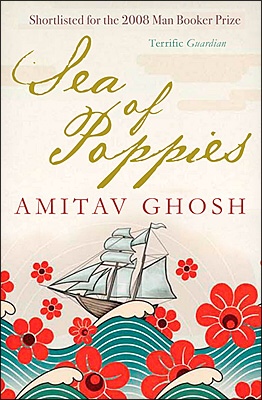 Amitav Ghosh, “Sea of Poppies” (2008) – This was very good. Taking place in Bengal in the 1830s, “Sea of Poppies” follows a variety of characters — indebted Bengali farmers, a disgraced former rajah, a mixed-race American sailor, a French orphan in Calcutta’s European quarter — as the forces of mid-nineteenth century globalization suck them in. The farmers of Bengal have been forced by the British East India Company to grow poppies almost as a monocrop- the Company foists debts on the farmers, and the only thing that grows for cash is poppy. Poppy, in turn, gets turned into opium. Opium (mostly- there’s still a subculture of Indian addicts) gets traded to China, which had previously only accepted silver as a trade item, an arrangement on which the British were none too keen. Meanwhile, debt peonage crushes the Bengali peasantry- there were massive famines in the 1790s, and forty years later you see peasants selling themselves into indentured servitude to go to places like Mauritius, to replace newly-freed African slaves in growing cash crops.

This makes it sound like it’s about the history, which it isn’t entirely. It is about characters getting swept up in forces beyond their control, from political economy to love to addiction. It’s also about the rough and ready adjustments people make on the fly to clashes of culture. Ghosh delights in the different dialects, including trade pidgin and the argot of the lascars, the sailors of the Indian Ocean. The characters are all pretty compelling, or anyway, “Berard Complete” – compelling without being tediously psychologized. It’s a longish book, but it moves at a reasonable clip. Eventually, everyone meets on former slave ship the Ibis, which carries its load of indentured Indians (who discover an identity as Indians, as opposed to one limited by region or caste, in their precarious position) into both literal and figurative storms, left to fates unknown. This is the first in a trilogy so if you’re looking for a conclusive ending this book won’t satisfy that, but otherwise it’s a great read. *****