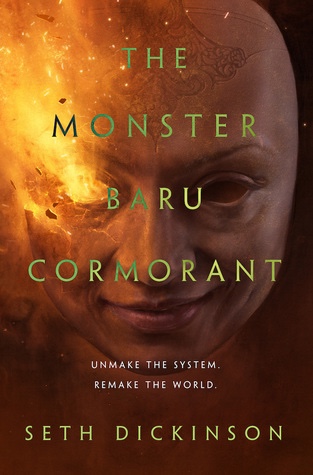 Seth Dickinson, “The Monster Baru Cormorant” (2019) – This one goes to eleven. The sequel to one of my favorite fiction reads this year, “The Traitor Baru Cormorant,” TMBC squeezes in all kinds of stuff. Six or seven viewpoint characters introduced in successive chapters at the beginning of the book! Multiple overlapping conspiracies! Multiple fictional games introduced, illustrating Themes! Currency speculation, druggings, naval chases, cancer cults! Head injuries! Dickinson doing his white-guy best with an Africa-inspired fantasy civilization, to go along with his straight-guy attempt at a lesbian main character! It’s a lot.

I’d say it’s a little bit too much, especially at the beginning where Dickinson introduces all of these characters and sets them in motion, expecting you the reader to keep track. I’m pretty good at that kind of thing and I found it stiff going. It’s hard to know how to introduce the plot, it gets so intricate. At its most basic, the titular Baru gets sworn in to a small elite of conspirators that runs the republic-empire of Falcrest after starting and betraying a rebellion in one of the empire’s provinces in the last book. She plans on trying to take down Falcrest from the inside to avenge her own homeland’s takeover, but at what cost?! Moreover, everyone in the Falcrest-running conspiracy is also conspiring against each other. This bathes everything in a kind of itchy paranoia and disdain- they can’t talk to each other without acknowledgment of the ways they despise each other. The stakes are high so the competition is lethal- in theory. Everyone trying to do each other in gets a little tedious when no one dies…

Anyway, Falcrest is in competition with another sort-of empire, Oriati Mbo. In many respects they are opposites. Falcrest, seemingly modeled after Rome and revolutionary France, is uptight, regimented, looking to remake the world in its own image, whereas the Oriati, modeled after various African societies with maybe a dash of India thrown in, is looser and more relaxed. Both are intensely concerned with health, and their approaches are symbolic- Falcrest’s obsessive hygiene which tends towards the lobotomy pick, Oriati’s lore and ritual-science derived medicines. Both grab smaller societies into their orbit, Falcrest through financial shenanigans backed by military force, the Oriati by cultural exchange which shades into confederation.

Some people want war between the two, some warn such a war would kill millions and doom civilization, others agree but want war anyway (Baru sometimes flirts with this). The action of the book is structured around Baru and the junior members of the conspiracy she’s in trying to track down a secret cult that the senior members think explains Oriati’s seemingly miraculous ability to maintain itself amidst baffling diversity. They conspire against each other as they follow a breadcrumb trail across the sea. Their efforts are punctuated by attacks from a Falcrest navy admiral and a former conspirator-turned-killing-machine who are out to get Baru for some of her previous betrayals.

It’s a lot, and it stretched my capacity to remember and to care. There’s a whole plotline of flashbacks amid all this, there’s the never-ending churn of mysterious shady conspiratorial behavior between the people on the boat Baru is on, there’s plots within plots. It’s overstuffed. That’s not to say there’s not cool stuff in it. The ending was decent, in a Grand Guignol/early modern biological warfare kind of way. Where it gives her space to breathe — apart from constant repartee with her frenemies and mulling over her guilt — Baru’s maneuverings are fun. The worldbuilding isn’t bad, there’s just too much of it for one book. The bigger problem is centering all of his world around a conspiracies of special people (the Oriati aren’t run by a conspiracy ala Falcrest as such but their destiny is in the hands of a small number of people). It took me out of the story a little- that’s one thing first book got well, making Baru feel like a small, if important, part of a world that worked according to real-world rules. This felt less credible- the book is incredible, in multiple senses of the word. ***’