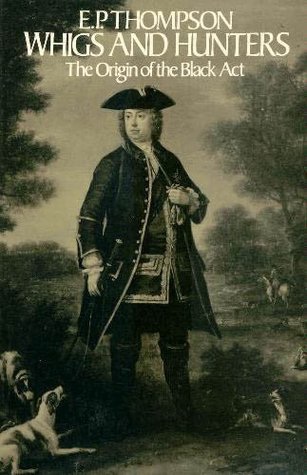 E.P. Thompson, “Whigs and Hunters: The Origin of the Black Act” (1975) – The Black Act passed in British parliament in 1723 mandated the death penalty for a variety of offenses ranging from deer poaching to destroying fruit trees to being in a forest in disguise. It also mandated collective punishment for villages suspected of holding people guilty of these crimes, and summary execution for anyone indicted of these crimes who did not show up for summons after forty days. In short, it made Britain’s penal codes, already harsh, much harsher.

The great social historian E.P. Thompson delves into the context of this act in this monograph, his first after “The Making of the English Working Class.” Conventional history says that the Black Act was what it said it was- a reaction to the depredations of the Blacks, gangs of poachers who rode in gangs and in disguise to steal deer and violently intimidate gamekeepers. You’d figure such a big change in the laws would be a response to a massive crisis, but Thompson shows that the Blacks made remarkably little impact and don’t show up much in the historical record outside of the Black Act and its enforcement.

At the end of the day, this is because blacking was a minor phenomenon, the act of a few dozen people in and around the royal park at Windsor and the aristocratic estates in Hampshire. If I have my English geography right, they went on to become nice outer suburbs of London. At the time, though, as Thompson shows us, these were forest communities, where traditional understandings of property rights were clashing with newer, capitalistic ones. Big money was moving in, buying up forests to turn into deer parks. The deer would then go around eating the crops of local villagers. Between that and the high price of venison, deer were irresistible targets for local men familiar with the forest. Resistance from the landowners’ gamekeepers escalated the situation and fights, sometimes deadly ones, broke out.

Why was ordinary English law — not exactly soft on property crimes to begin with — not up to the task of dealing with these small groups of bandits? Well, Thompson argues, it was- blacking was largely suppressed as a practice before the Black Act could be passed. The perpetrators of the most violent acts were executed or transported (to Maryland- this was before transportation to Australia).

But the cases inconvenienced the coming power in the land, namely the Whigs. Coming off the back of the Hanoverian succession (where they had to fob off a German king on England to avoid a Stuart restoration) and the crash of the South Seas Company bubbles, the Whigs, led by Robert Walpole, were feeling both their oats and somewhat insecure. In the cold damp banana republic that was early modern Britain, Thompson tells us, the Whigs and their backers in the city (and City) of London were pushing the bounds of fungibility of property. This entailed making things long understood as property of a less flexible kind — common lands and royal/parliamentary offices — more like cash money or negotiable instruments.

This was impossible under traditional long-standing arrangements in the countryside. So impelled by personal pique at their estates being trespassed upon (the Walpoles had estates in blacking areas, and Robert Walpole basically invented the modern role of prime minister), a small group of Whigs used their parliamentary positions to advance the clarification of property relations. If fungibility was the watchword for property, terror — replacing all previous arrangements — became the basic principle of enforcing property boundaries.

Thompson does his thing of bringing the long-ignored and despised English poor to life by building a detailed picture of the forest communities in the first three quarters of the book before moving on to the titular Whig hunters. He finds that in general the Blacks were men of small property, often backed by local gentry, against less the big landowners themselves and more their local enforcers. It’s written with characteristic verve even if the details bog down a bit. Perhaps it’s part of the point- the lifelike, chaotic welter of arrangements constructed over centuries by forest communities (which were quite hierarchical in their own right, Thompson doesn’t romanticize them) contrasted to the deadly simplicity of capitalism? Either way, a small but worthwhile installment in the canon of social history. ****’