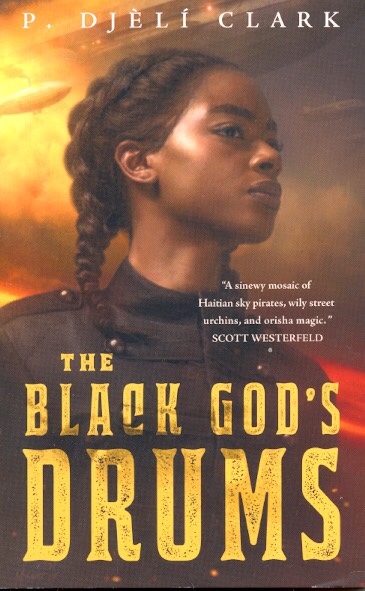 P. Djélí Clark, “A Dead Djinn in Cairo” (2016) and “The Black God’s Drums” (2018) – This is a fun pair of novellas set in an alternate history 19th century by a history professor at UConn. Those who know me know I have little patience for steampunk, but I can forgive the airships and clockwork men when they’re not put to the purposes of imperialist nostalgia, as steampunk is so often. On the contrary, Clark wrote a world where anti-imperial powers — Haiti, an independent Egypt — use magic and technology against the 19th century powers that were and become major powers in their own right. The detail work on the world is pretty decent and not too badly info-dumped on the reader. The storylines are similar- plucky young black women need to figure out mysteries that threaten New Orleans (in “Drums”) or the world (“Djinn”) with destruction. These works are too short for a lot of red herrings, character work and the like and so they sometimes reminded me of one-off tabletop roleplaying game sessions with one or two player characters. Mystery, preliminaries, asking wise women, finding the final boss, besting the final boss using some special characteristic of the protagonist’s. It’s a little formulaic but the prose moves right along, not bad for a commute read. I’d be interested to see what Clark could do with this world in full-fledged novel form. ****

Review- Clark, “A Dead Djinn in Cairo” and “The Black God’s Drums”